Team India achieved a great victory over New Zealand in 3rd ODI which was held in 23rd October, 2016 at Mohali stadium. Virat Kohli who is considered as the Indian batting sensation made an undefeated century which led the Men in Blues to victory. By this winning, they are now one step closer to the series winning. Basically, Black Caps missed a catch from Kohli since the starting his innings and through that mistake by Ross Taylor, Kohli properly used it and completely dominated New Zealand bowlers. Based on Kohli’s 154 runs innings, India reached the milestone with ten balls left in hand along with seven wickets. So, now the host took the lead in the five matches series by 2 – 1. 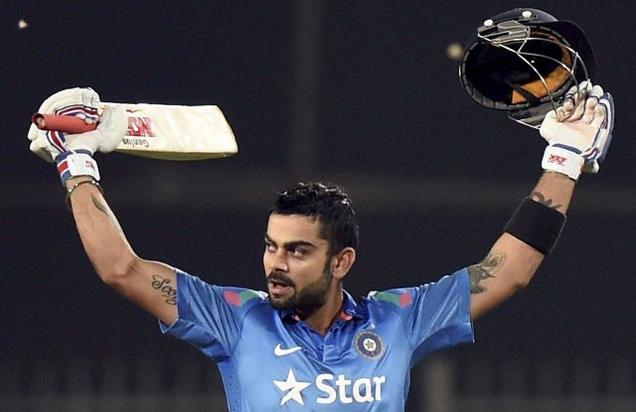 However, as the host nation team India known well about their ground nature and so, after winning the toss, the decided to field. The Black caps came to at bat first but could not settle well in the field. They made 285 runs by losing all wickets playing 49.2 balls. Tom Latham made highest 61 runs by playing 72 balls for New Zealand. Indian off break bowler Kedar Jadhav took three wickets. Though, New Zealand started the match well enough and sometimes it seemed that they could play a big innings but in the middle of the match, they faced some tremendous spin attack from Men in Blues and lost four wickets with consecutive four overs. At last, they able to make that minimum score and they also realised that it could not stop India for long due to their best batting line up. But though, they tried hard to win till the last but only for Virat Kohli, they remain unsuccessful.

To chase such score, India lost their one major player Rohit Sharma by Tim Southee. Rohit was lbw by Tim. On the fifth over of Henry, Kohli got his life back. And rest of the time, he simply dominated the opponent bowlers. He made his 26th century by 26th overs and it was his second time to make hundred and fifty runs in his career. He faced total 134 balls and made 16 boundaries and an over boundary. Indian ODI captain MS Dhoni also participated in this historical victory who made eighty runs with six fours and three sixes. He faced 91 balls. After Dhoni, Kohli made a final partnership with Manish Pandey which brought them 97 runs.

However, Black Caps still has chance to win the series after defeating in Test completely. They have still two ODI matches in hand and to ensure to win the series, they will have to win rest twice matches. They will play their fourth ODI in next 26th October, 2016 at Ranchi.