Las Palmas placed themselves in the top half of the La Liga table. Los Amarillos have continued to impress as they sealed another victory at home. Quique Setien’s lads showed another brilliant display of football as they remained unbeaten at home. On Monday night, they beat the Athletic Bilbao 3-1 at the Estadio de Gran Canaria.

The visitors started strongly & on the 5th minute of the game, referee Alvarez Izquierdo rejected a strong penalty appeal of the Los Leones. Host side’s Boateng lost possession and Benat Etxebarria escaped Aduriz on goal, but David Garcia bundled the Spain International to the ground & he couldn’t strike. Bilbao appealed for a penalty but the Spanish referee rejected to point the spot kick.

The hosts were relieved & soon recovered from the danger & suddenly attacked with a brilliant passing move with only 5 minutes left on the clock in the first half. Full back Michel Macedo chased down Tana’s pass which was quite wide & crossed towards Kevin Prince Boateng & the Ghana International didn’t make any mistake as he opened the scoring in the match on the 40th minute from close range. Los Amarillos got the lead. It was the 5th goal of the season for the former Milan striker. The first half finished 1-0 with the host getting a one goal advantage. 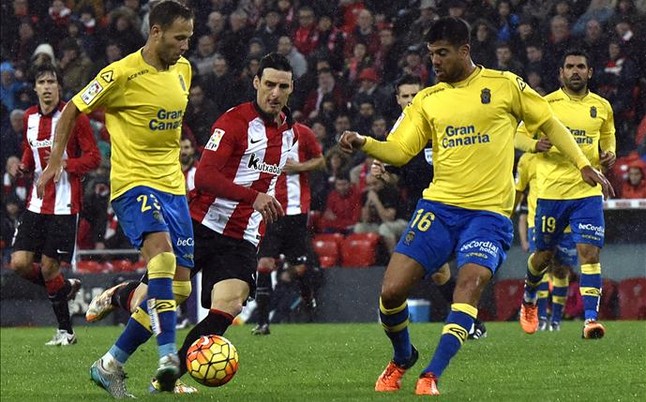 Tana’s pass found 34 years old Spaniard Momo who was playing as a substitute. The Bilbao defenders gave him some room & the calm headed guy advanced to the left hand side pf the box & finished with ease to give the lead of 2-0 to the hosts. The midfielder replaced the previous goal scorer Boateng after the break & easily beat Kepa on the 50th minute to get his 3rd goal of the current campaign.

The visitors’ hopes were almost gone as their talisman Aritz Aduriz was sent off with 15 minutes to go as he was shown the second yellow as soon as he complained about the first one. With less than 15 minutes left on the clock referee blown the whistle to give the visitors a penalty as he saw the Palmas’ defender Michel handelling the ball although the video footage showed that the ball had hit his shoulder. Former Atletico Madrid midfielder Raul Garcia pulled one back from the spot kick.

But 27 years old Jonathan Viera sealed the victory with his closing minute’s strike as he got his 4th goal of the season to move his team to the top half of the table. Last season the Amarillos secured 11th position in the table but the Quique Setien’s lads has improved more this season as they are yet to taste any defeat in the home soil having already played 7 games at the Estadio de Gran Canaria.