Spanish giant Barcelona has defeated by opponents Celta Vigo. Last night they ruined  the La Liga defending champion by playing offensive football at home. They were very closed to reach into top after drawing of Real Madrid 1-1. But they demoted in the fourth place after defeating by 4-3.

This is not for first time, last season they also defeated Barcelona at home. Despite of having three strength Neymar, Messi, suyaresera they had to return to play a 4-1 defeat. That was the biggest rate of the champions in season.

Messi was absent in the clash and Arda Turan replaced him. But the Uruguayan star Luis Suarez attacked on 11th minutes but the opposition goalkeeper able to save the goal. After that Celta came on track and started to show surprise. In twenty minutes they approached their first goal. 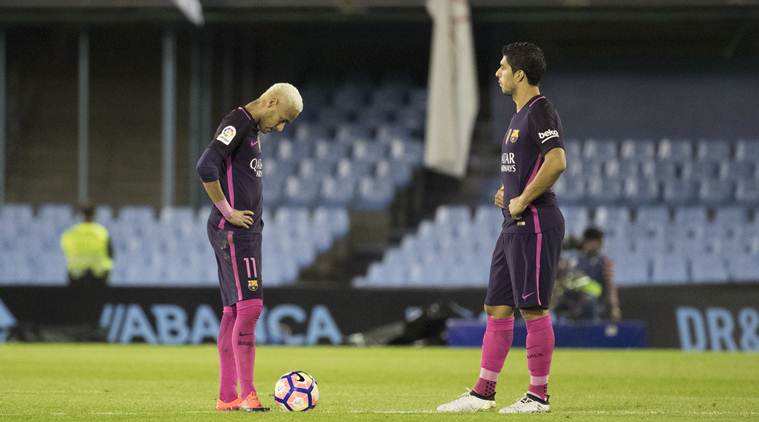 Aspas was so desperate to kick goal against Barca and nobody could prevent him. In 30 minutes his counter attack became fruitful which add one more score in with Celta. The striker was also made score in last season against Barca.

Barca defense broke down once again in Celta attack in the 33rd minute. By saving Asap’s attack French defender Jeremy Mathieu kick the ball in self net. The fans and players and coach Bewildered to such a condition of the champion.

After first half the boys success to back the game in their favor. They able to reduce the margin in the 58th minute. Pique send the ball what was sent from substitute Andres and it was fabulous goal.

In 64th minute Neymar shooted a penalty to beat goalkeeper. This goal reduce the margin in 1 score. Game was slowly coming their favor but a little bit fault of the goalkeeper ruined their game. To pass the ball to Hernandez he hit it with his but the hit got the ball into the net.

In the 87th minutes a cross from the right side denisa suyaresera hope to excite the fans again Pique header goals. But finally they had not got the time to repay the goal and they lost an unexpected game.

Barcelona had the high chance to promote on the top after fourth draw of Real Madrid against Eibar. If they able to win the game they will be the top of point table. But their lost down him on the fourth place in the list. With 15 points Atletico Madrid leading the top after beating bhalensiyake.