Spanish giants Atletico Madrid secured their place in the next round but two late blows stunned them at their own home soil. The two La Liga rivals came head to head in the second leg of the Copa Del Rey 8th finals at the Vicente Calderon in Madrid. Where the under dogs produced a shocker despite being eliminated by their league opponents.

It was the 3rd meeting between the two sides inside 3 weeks period. Atletico got the better of Las Palmas the previous 2 times but this time the mid table club produced something unexpected in the cup clash. The hosts had the advantage of the 2-0 win in the first leg and even a narrow defeat couldn’t stop them from going through to the next round. A couple of big names missed but Diego Simeone still went with quite a strong XI to secure the next round without any obstruction. 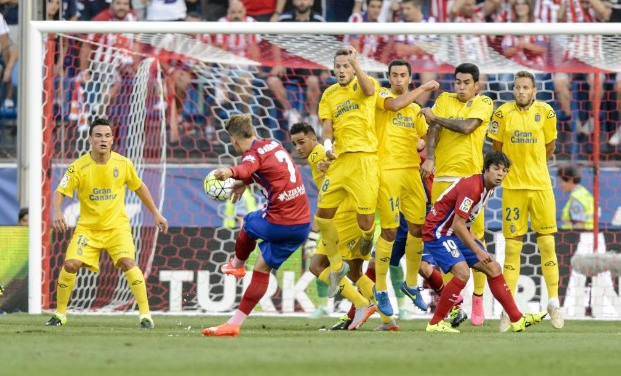 Visitors were forced to used an early substitute as midfielder Hernan Santana was taken off the pitch with just 25 minutes passed on the clock and was replaced by Angel Montoro. Goal drought seemed in the first half as no team could net the ball during the first 45 minutes.

Although the first half ended goal less but there was no shortage of entertainment and celebrations for the spectators as no less than 5 goals were scored on that period. French superstar Antoine Griezmann opened the scoring for the hosts on the 49th minute of the match. It was the 12th competitive goal of the season for the 25 years old attacker. Croatian attacker Marco Livaja levelled the line for the touring side on the 57th minute. Angel Correa found the net for Simeone’s team, just 4 minutes later. The young Argentine gave the lead to his side with his 6th strike of the season. The game was heading towards an Atletico win but football Lord had some other ideas. The Croatian striker Livaja got his number 2 of the game to fulfill his brace on the 89th minute and levelled the card 2-2. It was the 6th strike of the campaign for the former Empoli forward. But some more shockers were waiting for the Los Rojiblancos. Argentine midfielder Mateo Garcia netted in the very closing moments of the game to seal it for the Los Amarillos.

The game ended with a 2-3 defeat for the home side but they still went through with the 4-3 on aggregate. Las Palmas are out of this season’s Copa Del Rey. They are on the 8th position and the Rojiblancos are on the 4th position in the league table.