Real Madrid, the most successful club in the European football’s history didn’t have that much success in the recent seasons at the La Liga considering the success of their life time rivals Barcelona. The Galacticos didn’t win the top tier league competition of Spanish football in the last 4 seasons, 3 of them won by FC Barcelona and the other was won by their city rivals Atletico De Madrid. The very last time the Los Blancos had managed to finish the league sitting at the top position in the league ladder was back in 2011-12. The 11 times UCL winners had the last laugh in the league, just 3 times in the last 10 season. 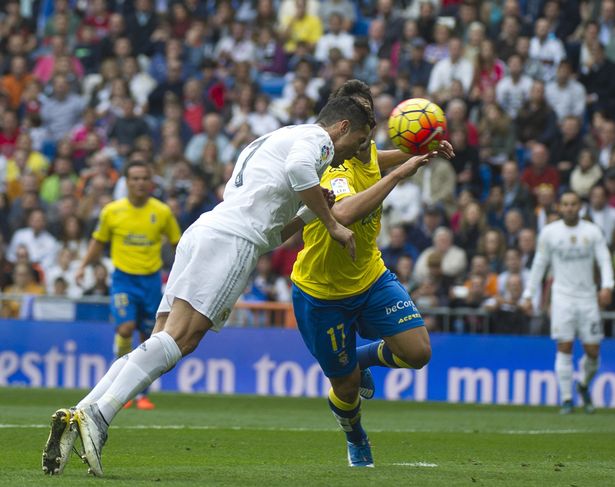 But this season Zinedin Zidane’s lads started the league on a high as they were almost unbeatable at the first half of the league and rarely dropped any points in the beginning stage of the Liga BBVA. The gap between them and the second position club was quite big but somehow the toppers of the first half of the league lost their form suddenly and are now at the second position in the league although they have played one match less than the current leader Barcelona. But even if they win that extra match they will be no more than 2 points ahead than the defending champions.

After a 2-1 defeat against Valencia and a lucky 3-2 victory against Villarreal the Whites have once again dropped their points this time at their own home ground against Las Palmas. A 6 goal thriller has handed one point to the each team after a dramatic finish. But the result could have been lot worse for the hosts if their savior Cristiano Ronaldo wouldn’t struck twice in the last 10 minutes of the game.

Isco opened the scoring for the home side with less than 8 minutes having passed in the ref’s clock but Tana didn’t take more than 2 minutes to react as he levelled the line on the 10th minute. The first half finished 1-1 and Gareth Bale was sent off on the 47th minute and the visitors took advantage of an extra man and scored two more inside 3 minutes between 56th to 59th and the line seemed 3-1. The touring side could have scored a lot and could manage all 3 points from the fixture but CR7 netted twice in quick succession to finish the game levelled and gifted his side a vital point. The 32 years old super star has scored on 21 occasions in this ongoing campaign for his club and are just one point behind than Barca with a game in hand.