Ciro Immobile has been in sensational form in the Serie-A this season as he continues to score more and more goals. The Lazio forward has gifted his club another victory as he helped the side securing 3 important points. He scored a brace on the Sunday night against Cagliari. His stunning form has kept his team very close to an UEFA Champions League spot. Immobile got a great start to the campaign and Ciro becomes the hero, yet again as he did what he loves to do the most, writes his name into the score sheet.

At the Stadio Olimpico, referee Luca Pairetto awarded the hosts a penalty just 6 minutes after the first whistle. The 27 years old went to take the spot kick and didn’t make any mistake to convert it into the first goal of the game and opens the account for the day. The Italy international scored another on the 41st minute to complete his brace for the night. The home side went to the break with 2 goals’ advantage. Angolan full back Bertolomeu Bastos scored the third goal for the club and the Serie-A giants grabbed a comfortable 3 goals victory over the Rossoblus. 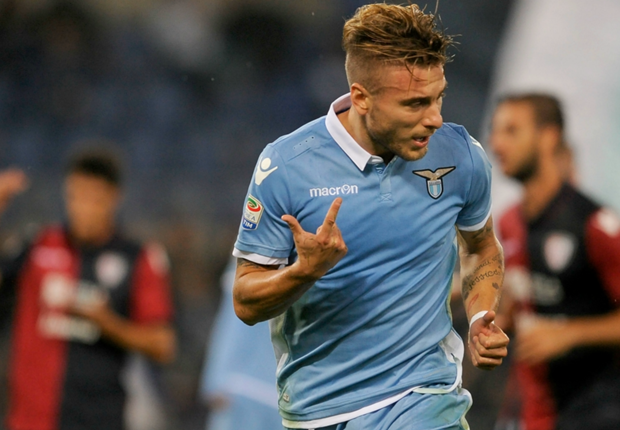 The former Borussia Dortmund attacker has stabled his place in the peak of the top scorers list in the Serie-A. He is now leading the chart with 13 league goals beside his name after just 9 appearances. He has got 3 more than his nearest opponent, Juventus’ Argentine sensation Paulo Dybala who is following Ciro with 10 goals. Another Argentine striker, Inter Milan goal machine Mauro Icardi stands on the 3rd position with 9 goals. League leader Napoli’s top attacker, Dries Mertens occupies the 4th position along with Roma’s Bosnian star Edin Dzeko as both have got 7 strikes so far in the campaign. Last season’s top striker Gonzalo Higuain has been struggling this season and just has written 3 beside his name.

Le Aquiles (The Eagles) keeps on their 4th position in the league ladder and are just behind to Napoli, Inter Milan and title holder Juventus. On the contrary, Cagliari stands on the 16th position with only 6 points from their 9 played clashes. They are no points cleared than the relegation regional Crotone but are just now in the safe zone as they have a better goal difference. Napoli leads the race with 25 points. The Biancocelestis will play Bologna in their next league game away from the home. Immobile will certainly be looking to increase his number of goals.