Just imagine if you have to pick the best 3 strikers in the world right now, whom would you have chosen? Doesn’t matter, who would be your favourite, if you have a little sense about the current football world, then Robert Lewandowski certainly would be one of your picks. His goal scoring ability and consistency has been more than impressive throughout the last couple of years. He has been sensational for the well known German clubs. At first he did some fantastic job for Signal Iduna Park based club Borussia Dortmund and after having ended the contract with the Black and Yellows, the Poland international is becoming more and more dangerous wearing the red shirt of Bayern Munich. 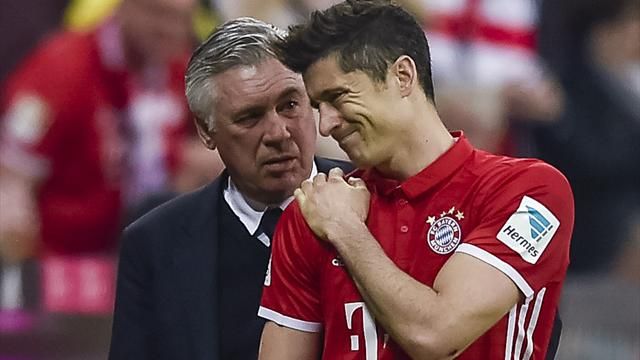 The Poland national team captain missed the crucial match for the Bavarians against the Los Galacticos in the UEFA Champions League quarter final 1st leg clash with a shoulder injury. He missed the training on the Monday and then could only practice no more than 20 minutes and finally didn’t feature on the Wednesday night and his absentee cost his team the match as they faced a 1-2 defeat at home despite having a first half lead with an Arturo Vidal strike on the 25th minute.

Lewandowski is the key player for the Allianz Arena based club as he is their highest goal scorer and has the ability to change the complexion of the game within a few moments. Bayern’s German attacker Thomas Muller just came from the injury and had his first start after a few matches absentee and it was almost impossible for the 2010 FIFA World Cup golden boot winner to replace the Polish super star. Lewy is considered to be irreplaceable and it was proved once again.

Real Madrid is one of the most favourite opponents in Europe for the 28 years old. He scored 4 goals in a game against the same opponent for Dortmund, four years ago and went under limelight overnight. This time, Cristiano Ronaldo stole the show with a brace and now the title holders are just 90 minutes away from reaching the semi final once again. The second leg will take place on 18 April at Santiago Bernabeu Stadium where the Los Blancos will be certainly favourites but the fingers of the Munich fans will be crossed so that their talisman can play and can turn their fortunes around. Spaniard Javi Martinez will miss the 2nd leg as he was sent off on the Wednesday night.