May be the Sky blues were much more confident about their penalty skill and that’s why their effort was not well enough in 120+ minute. Match goes to tie-breaker and first attempt of Chilean midfielder Arturo Vidal saved by Argentine Manchester United goalkeeper Sergio Romero which encouraged the team of Gerardo Martino. First shoot for Argentina took by their No. #1 footballer Lionel Messi but he missed. Though still they have enough opportunity to beat Chile in tie-breaker but the missing by Lucas Biglia finally damage another title winning opportunity by the nation of Diago Maradona. 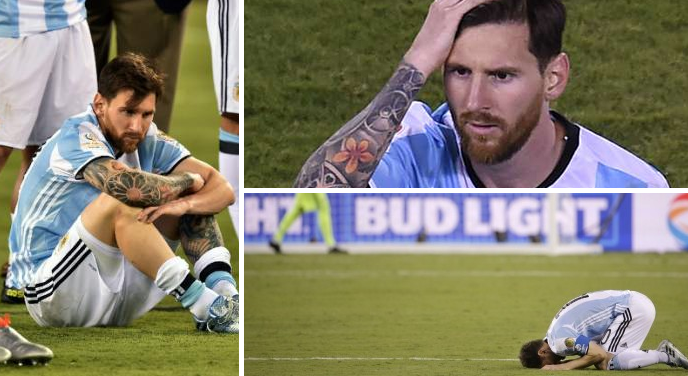 Lionel Messi said in a press conference that this 4th straight loss in final made this ultimate decision to retire early from his national team. He is also mentioned that, he have no capacity to represent Argentina anymore.

Sergio Aguero told that Messi is broken after missing penalty into the final. Also add that few more footballers of their team can follow Messi which indicate that other players also have chance to take rest.

His fans became frustrated after this decision by him and tried to give him consolation by Social media. Though Anti-Argentine fans always indicate this superstar footballer is perfect for FC Barcelona and not for Argentina which influence Leo Messi to take this decision as well.

But it’s need to mention that, he is the highest goal scorer of Argentina national team as well. Into the Semifinal match against USA, he broke the record of Gabriel Batistuta. He played for his 111 matches in total for his nation where scored 55 goal himself. We should count his assist as well to understand his dedication for his country.

Few days back, Diago Maradona threat this current team before this final against Chile by saying, don’t need to come back in homeland, if you guys will lose. This kind of comment mentally forced the team and made nervous as well.

However, football world is surprised and shocked after watching this very early retirement by Lionel Messi. People still want to see him for Argentina and can’t believe his decision at all.