One of the world famous dribbler of all time Lionel Messi will not take part in 31st edition of Olympic which will be placed at Rio de Janeiro, Brazil from 5th August, 2016 confirmed by Argentine Manager Gerardo Martino. Instead of Rio Olympic 2016, this Argentine legend Messi will participate in the centennial event of Copa America 2016 which will run from 3rd June to 26th June, 2016.

Due to the restriction of agreement with Spanish giant Barcelona, Argentine star Messi has got preference to participate in one tournament between two and he chooses Copa America. 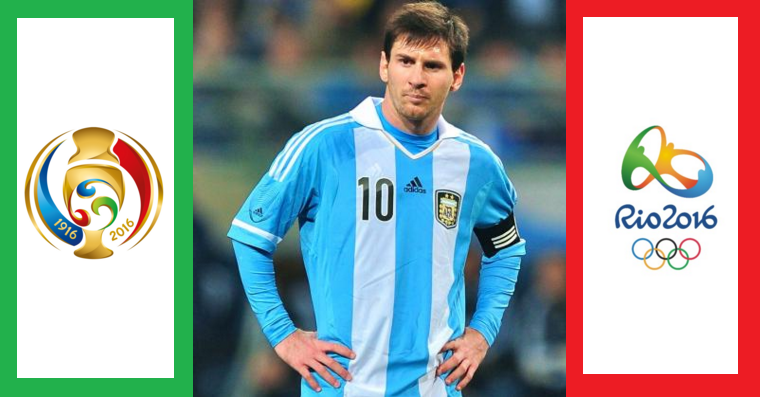 Each nation can have three over age players in Rio Olympic, according to the rules. However, Leo is able to take part in Summer Olympic 2016 as an over aged player among three but he needs some rest as stated by manager Gerardo Martino and also the Olympic games will be held two months later than Copa America. Martino also added that, there are so many competition for national team in this year and he does not want that Messi will face any injury like burnout this year. Though, it was Leo who helped Argentina to win 2008 Olympic football title in Beijing but he will not participate again. This living legend also led Argentina to World Cup final in 2014 in Rio where they lost 0 – 1 goal against Germany in extra time.

It’s needed to mention that, upcoming 2016/17 season is very demanding season as for Argentina and also Barcelona. It will be too much for this Argentine star to play in both events and he also needs to focus on World cup qualifying matches.

Also this season 2016/17 will be long for club Barcelona and they want to win each and every match. So, they don’t want to risk Messi to participate in both front. Leo, the legendary footballer chooses CA instead of Summer Olympic cause CA is the oldest international football tournament and also considered the world’s 3rd largest and popular competition and also this season of Copa America will be very special for celebrating hundred years anniversary. It will be extended version of CA where also 6 rival teams from CONCACAF will participate. So, this tournament is more important to Messi.

However, absence of Messi, team Argentina would probably suffer in Rio Olympic 2016 but the coach of Argentina is not willing to take the risk for Messi. He has plan to replace someone instead of this Argentine great.

Argentina won the title of Rio Olympic football competition two times and one in the hands of Messi. But in this circumstances, this is very good decision for Leo to play in CA opinion by football genius.

The current performance of club Barca is not good and they lost three matches in a row and Leo has got only one goal but they have a good comeback. In their last match, they simply destroyed Deportivo la Coruna by scoring 8 – 0 goals. So, it is quite difficult for both Argentina and team Barca to put Leo at risk to fall in injury. So, they have decided that Lionel Messi will be available in Copa America Centenario but skip Rio Olympic 2016 football tournament.