Liverpool boss Jurgen Klopp and Jose Mourinho from Manchester United are both keen to land a striker to strengthen their attacking option and at the same time they have focused on the same player who is Brazilian international Luan Vieira also known as simply Luan. Luan is also the one player who helped the Brazilian team to win the Rio Olympics 2016 gold medal by defeating Germany at the final of football competition. So, as a result, he is getting focused by then after showing his amazing skill with Brazilian team. But also earlier this summer, Spanish giant Barcelona was also interested about him but later shifted their attention to other alternatives. But now, the Red Devils are in battle with their English rival Liverpool for this Brazilian at the last moment of the transfer window. According to the report, the Reds are still one step ahead of the United where they have already tabled £30 million bid for the Brazilian’s service. Manchester United are not yet placing any offer. 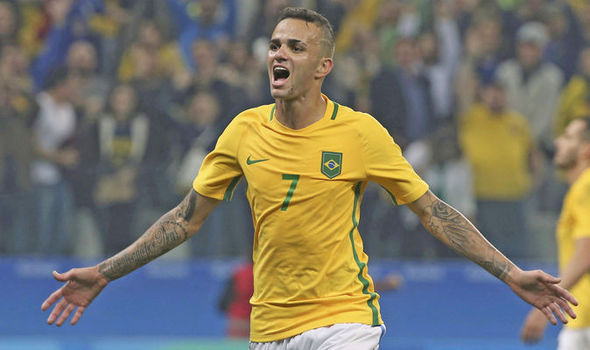 23 years old Luan is currently playing for the Brazilian club Gremio where he first started his senior career with Tanabi in 2012 but did not able to make any appearances with them. Later, he moved to the Catanduvense in 2013 and also made none appearance with them. Later, he has joined to the Gremio where with he also spent his youth career. Till now, he made almost 75 appearances with the Brazilian side and scored 20 times so far.

However, the vice president of the club Gremio stated earlier that if they will receive a good offer for the Brazil international then they would consider about it. He also revealed that they have plenty of good players but every talented player is wanted by renowned clubs. This young star played all six matches in Rio Olympics 2016 and was the most important part. He was selected as the 2nd top scorer jointly with new Manchester City player Gabriel Jesus where the top scorer was Neymar.

Now, the club has received an offer from the English sides where the Reds offer is almost considering and their offering price is well enough for this 23 years old Gremio star. Now, they have to take decision quickly because there is only a day in hand before the transfer deadline. In 2016, this Gremio striker made 15 appearances and keep counting his scoring which is almost six times. So, Klopp thinks that this striker would shine the Premier League this summer by putting their jersey on.

So, it seems that this time the Reds are going to hijack this Brazilian forward from the grasp of the Red Devils, Barcelona and Italian Juventus where they were all keen to him.