Liverpool vs Arsenal, one of the oldest and most epic battles of the English football which is very much popular clash among the football fans around the globe. Both the giants from the England, have got popularity, history and money to attract the fans and the followers. They have got enriched history and that’s why people expect much from this kind of big clubs. These two clubs are among the ‘big fives’ of the top tier competition of English football and their battles against each other would be expected to be an elegant one as both the sides have got quality footballers and experienced managers. 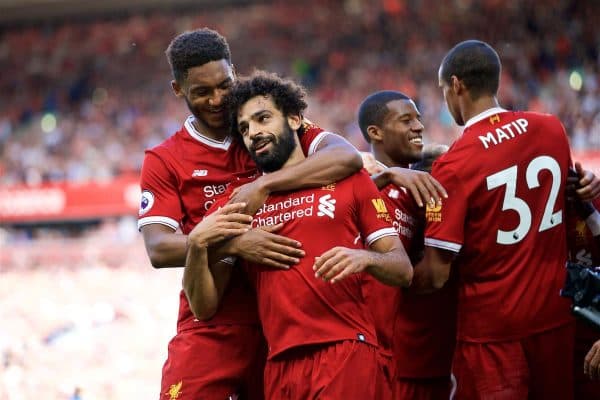 The Marseyside Reds hosted the Gunners on the Sunday afternoon at the Anfield Stadium in a crucial EPL game. The All Reds came with fresh memory of 1-0 victory against Crystal Palace and were yet to be beaten in the league this season but the Gunners were under pressure as they just faced a defeat against Stoke City as their trip to the Britannia Stadium wasn’t a healthy one for them. The Potters secured a 1 goal victory on that occasion to give Arsene Wenger’s lads their very first downfall of the campaign.

Jurgenn Klopp the Liverpool head coach, who is marching with a young squad, named a strong line up against the life time rivals. Philippe Coutinho wasn’t there but the Reds hardly missed the attacking midfielder. Loris Karius stood between the sticks, Joe Gomez and Alberto Moreno got back to the XI. Emre Can too started. Arsene Wenger made some big changes to his starting package. Sead Kolasinac and Shkodran Mustafi were dropped out after the horrible show at Britannia. Alexanadre Lacazette missed his spot in the start but was used as a substitute. Chilean start Alexis Sanchez was brought back.

Brazilian forward Roberto Firmino broke the dead lock on the 17th minute with the opener, thanks to the assist of Joe Gomez. Senegal attacker Sadio Mane doubled the lead just 5 minutes before the break and the home side was in the driving sit during the break. Egyptian Mohamed Salah made the line 3-0, proving his worth and showed what a good signing he was for Klopp and his team. Daniel Sturridge ddidn’t got the chance to play from the beginning but replaced Mane on the 74th minute and put his name on the card straightway, 3 minutes inside his appearance in the field. All the 4 forwards scored one goal each and the Marseysiders left the ground with a convincing victory.