Liverpool continues their good form and gets another victory at the Anfield. The All Reds have earned a 2-1 victory against an impressive Burnley side who had given almost everything to achieve something from the fixture but all their hard works went to vein as nothing was enough to stop the in form Jurgen Klopp’s side. After a comprehensive 3-1 victory against the Gunners, the Reds have managed to earn all 3 points from a league match for the second the time on trot but this time from a hard fought clash. It was also their 3rd consecutive victory in their own home ground.

The Clarets toured the Marseyside Reds’ ground Anfield to play an English Premier League game which took place on the Sunday afternoon. Considering the strength of the two teams, an easy victory was expected for the hosts and the EPL giants have somehow managed to snatch the game from their counter parts. 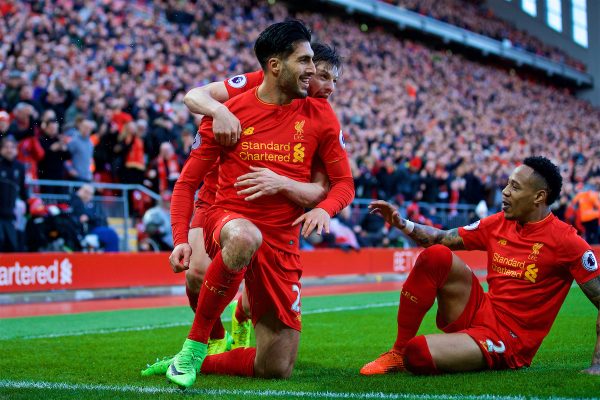 The visitors got a flying start as English attacker Ashley Barnes opened the scoring on 7th minute to give his club an early lead and gave his team mates an occasion to celebrate. It was the 5th strike of the campaign for the 27 years old who had not found the net for a single time in the very last season. Matthew Lowton provided the assist of the goal. Dutch midfielder Georginio Wijnaldum, who has joined the club this season levelled the line on the very last minute of the opening period and continued his stunning form in his debut season for his new club. The former Newcastle United midfield warrior has found the net on 5 occasions so far in this ongoing campaign. The first half-finished all levelled at 1-1.

German young midfielder Emre Can scored the most crucial goal of the game as his 61st minute strike which was also his 4th of the season, decided the game and the Reds left the field with a 2-1 victory as no more goals were scored after that and also achieved very crucial 3 points and consolidates their place at the 4th position with 55 points although they have played 2 games more than the 5th and 6th placed Arsenal and Manchester United. Burnley is currently at the 12th position in the league table with 31 points from their first 28 league matches. Despite facing the downfall, their fans should be proud as their players played really well at a ground which is always tough to visit for any side.