The Gunners are in the transfer market and look for a sustainable striker where they bought already one striker this season named Japanese Takuma Asano from Sanfrecce Hiroshima with an undisclosed fee but keep looking for another. They have focused to French striker Alexandre Lacazette who is their top priority. Arsenal already placed £29 million bid for this striker which was rejected by the Kids. After failing first time to get him, the Gunners were planning to increase their bid amount but in the meantime, Lyon faced against French Ligue 1 champion Paris SG in a friendly match where the Kids defeated by 4 – 1 goals. And the most horrible news is the French striker has hitted into his hip and fallen into injury which seems very dangerous. According to the report, in this circumstances, the Gunners boss Wenger would possibly shift his interest from this striker where he needs one who would play from the beginning of the campaign. 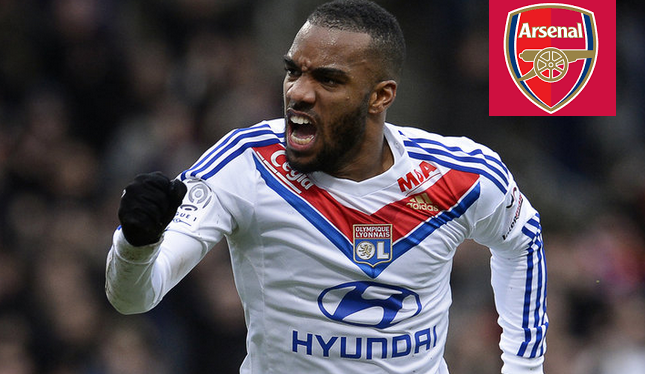 Sun, which is a renowned news portal stated that the Frenchman will have to face the medical tests and later it will be clear that how much deep his injury is.

Before this incident, the chief of the Gunners has just increased their bid to £40 million to buy this French striker where the French side were also desperate to hold their star to their side. But now the thing is completely different. Besides, the Frenchman, Wenger also keen to recruit Valencia’s German defender Mustafi Shkodran. This 24 years old centre back is just the another target of the Gunners. This summer, Arsenal have only made four transfer where among them Swiss midfielder Granit Xhaka is their big recruited from German Borussia Monchengladbach with unknown fee. The rest two new players are Rob Holding from Bolton Wanderers and Kelechi Nwakali from Diamond Football Academy.

Bruno Genesio, who is the boss of the Kids has stated that they are worried about their regular star where Lacazette is the leader of their attacking side.

French side Lyon took this 25th years old striker in 2010 and since then he played with them total 173 appearances and scored 72 goals so far. This Frenchman scored 21 goals in 34 league appearances where all total made 23 goals by playing 44 matches in last Ligue 1 season. He was the top goal scorer in 2014/15 in Ligue 1.

He is also playing for the French national team since 2013 and debuted his international career in 5th June, 2013 against Uruguay. Till now he has played with the national team 10 matches and scored just once against Denmark in 29th March, 2015.