Malaga faced their 3rd consecutive league defeat as they struggled to find the form once again, this time against Real Sociedad. Before the Sociedad clash, the Boquerones had two tough visits against Sevilla and Celta De Vigo. Marcelo Romero’s lads had conceded total 7 goals in the previous two league clashes and were looking to find the form and were keen to bounce back against the Txuriurdins but they displayed another disappointing performance in front of their own home fans as they left the field with a 2-0 defeat.

The two club of the top tier league of the Spanish football came head to head in a league clash at the La Rosaleda on the Monday night. Malaga attacker Sandro Ramirez was forced to leave the field due to an injury with just 20 minutes having passed on the clock as Adalberto Penalanda replaced him on the 21st minute of the game. The first half ended goal less as no team could break the drought during the opening period of the match. 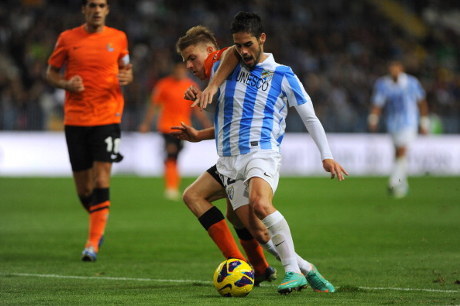 The visitors got a flying start in the second half as their Spaniard midfielder opened the scoring on the 50th minute of the game. It was the 4th competitive goal of the season for the 25 years old. Former Malaga attacker Juanmi doubled the lead as the 23 years old scored the second and the final goal of the match on the 62nd minute. It was the 7th strike of the season for the Spaniard. Willian Jose provided the assist on this occasion. No more goals were scored and the Errealas got the 2-0 victory.

It was not only the 3rd consecutive defeat for the Boquerones but also they have gone 5 straight games without a single win in the league. Marcelo Romero’s men have just won 3 out of their last 10 league clashes. They are currently at the 13th position with 21 points from the first 18 league matches.

Txuriurdins gets back to the 5th place after this victory. They have got 32 points from their first 18 games and are just 2 points behind than the 4th placed Atletico Madrid. Villarreal is breathing behind their necks with 31 points from the very same number of games. It is their 3rd victory in the last 5 outings who also have won 7 times out of their last 10 games and are flying high at the moment. Eusebio Sacristan should be very much proud of his lads who will take on Celta De Vigo in their very next fixture at the home.