Manchester City captain Vincent Kompany has no chance to play before the New Year. According to report he has been sidelined from the side. The damage of knee ligament forced him to kick out from the club. Doctors advised him to take rest at least five weeks. Though some initial test yet not completed but it is sure he will not take part at least one month.

Kompany was hurt on Saturday when they played against Crystal Palace. Man City was chased the match but unfortunate he stumbled with own goal keeper Claudio Bravo. The injury forced him to throw out from the field. Later it was confirmed that he is suffering knee injury in his right leg.

BY considering his ligament condition doctor expected he is not able to play at least on month. That means Kompany will not take part in the City next match in Germany. It is an important match for the side to secure own place for the Champions League knockout stage. It is very disappointing such an important match the team will play without their skipper.  Because Wednesday the defender will fly to Barcelona to meet specialist Dr Ramon Cugat who will treat him. 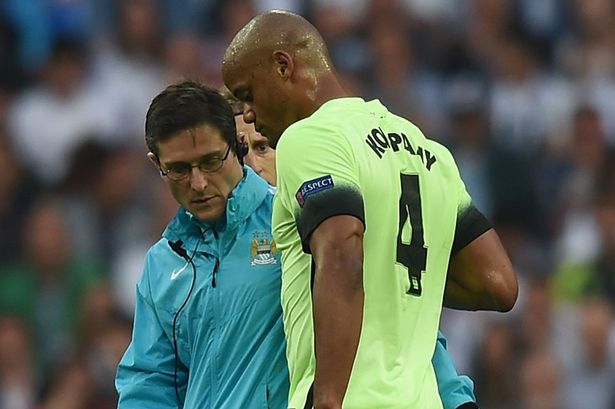 The City boss Guardiola also very disappointing for the captain.  He revealed on press conference about Wednesday’s Champions League game at Borussia Monchengladbach.

He told fortunately it would not too bad in the head, because that is the most difficult thing, but in that action he had a little bit of a problem with the knee and the next weeks he will be out.

He exclaimed that how much the captain upset for his injury. Because it’s long time he could not  able to run field. Not only for him it is also unexpected for any footballer.

By answering the reporter’s question how long he stayed out from the field, Guardiola said he has not the exact time. It is total uncertain.  He added that the doctor told him he would be out for weeks but didn’t explain exactly how many.

Guardiola exclaimed he had not spoken with the doctor. But the coach hopeful because he is in the best hands. As Cugat is the part of their team and he will be controlled there and make the best treatment possible.

He also added that he is  looking for Vincent to finally play regularly in the team and promised to help him week after week to see if he is able to play more often.