English Premier League 2017-18 is being ruled by both the Manchester giants as the two teams from the very same city has kept their winning ways running. But the newly rising Blue Moons have been more devastating as they are not only winning but also destroying their oppositions completely. Anything which is coming their way has been demolished and it seems that Pep’s lads are just toying with the counter parts. 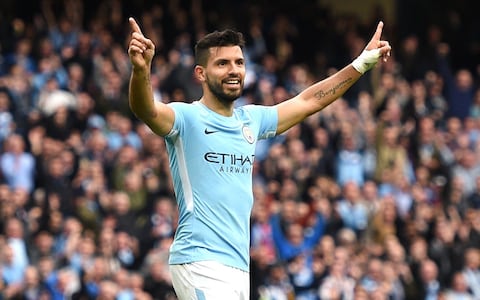 The Sky Blues who are yet to face a defeat in the league in this ongoing campaign, has won 5 out of their last 6 EPL matches and has already grabbed 16 points from the played fixtures. Their performance has been impressive and a matter of concern for the rivals and the opponents. Pep Guardiola has been guiding themselves in the proper way and their recent match results are the proof of that. In their last 3 matches, they have scored no less than 16 goals! Would you believe it? Although it is very hard to believe but they have simply made it happened. It’s not everyday you can score 4 or 5 goals in a Premier League match. But they have been just phenomenal in the recent times.

The Citizens struck 5 times against Crystal Palace at the Etihad Stadium on the Saturday afternoon and their new signing Ederson kept another clean sheet. A brace from Raheem Sterling and one each from Leroy sane, Sergio Aguero and Fabian Delph led them to another mammoth victory. They actually started the Staurday afternoon from where they finished against the Hornets. They blasted Watford by scoring 6 at the Vicarage Road Stadium and even before that, another league giant Liverpool faced a shameful 5 nil defeat against them. It has been quite incredible by Pep’s boys and now they lead the table of the highest tier competition of England and their town rival, the Red Devils are following them from the very second position. Both the clubs have got the same number of points (16), but the one in the prior, have got the better goal difference statistics in their favour.

City’s talisman Sergio Aguero has scored 6 league goals so far and tops the highest scorers list along with United’s Belgian star Romelu Lukaku and Chelsea’s Spanish recruit Alvaro Morata. All 3 of them scored 6 goals and will be looking for in the upcoming clashes. The league leaders will have a trip to the Stamford Bridge as they will face the Blues of Chelsea in their very next match.