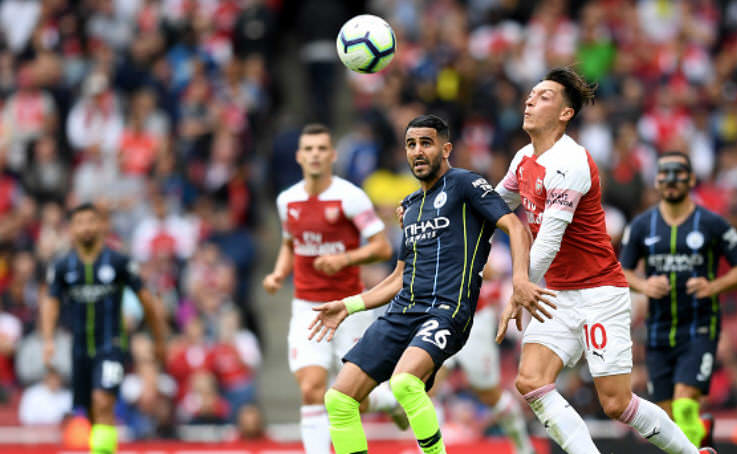 However, in last season of EPL the Gunners finished it standing on 6th position and they achieved 63 points totally by playing 38 league matches.

However, Manchester City is on the way to keep their throne continue and they have started the season very good in English Premier League. At the away venue of Man City, the apprentices of Pep Guardiola beat the Gunners. At the Emirates Stadium in local time afternoon, defending champion the Citizens won by 2 – 0 goals.

The guest team Man City started the match very aggressively and in 14th minutes of the game, they led the match. French defender Mendy passed the ball to Raheem Sterling and he escaped two opponent players and with strong shot the English midfielder found the net.

In 28th minutes of the game, due to the performance of Cech, the Gunners was saved once again. Mahrez made his debut with Manchester City in the match and he made an amazing free kick there but Cech stopped the ball but in return ball French defender Laporte made a shot. But once again the Gunners stopper stopped the ball. So, first half ended with 1 – 0 goal. In the 6rd minutes of the 2nd half, Sergio Aguero got the goalkeeper alone in a counter attack. But his shot was stopped by the Arsenal goalkeeper.

Just a minute later, the guest team got the 2nd goal. Mandy passed the ball into the box and Portuguese midfielder Bernardo Silva received the ball and touched it to the net. However, it was the first match of both Arsenal and Manchester City in the new season of Premier League.

In the another match of the day, West Ham United was defeated by Liverpool by 4 – 0 goals. Sadio Mane scored pair of goals in the match. Mohamed Salah and Sturridge scored one goal each for the Reds.