Former Barcelona goalkeeper Claudio Bravo going to face their veteran teammates Lionel Messi, Luis Suarez and Neymar on coming October. Though they played together in past but this time they going to fight against other which going to be so excited.

To face the three Barca legend not an easy task at all. It becomes a difficult job for anyone. But the stopper is no more upset or worried. In an interview he mentioned that he was no more nervous. Eventually he felt excited for the match.

The goalkeeper told he became desperate to face his former teammates on field. He took the thing as a challenge not scared. He thought it would be a special occasion for both. 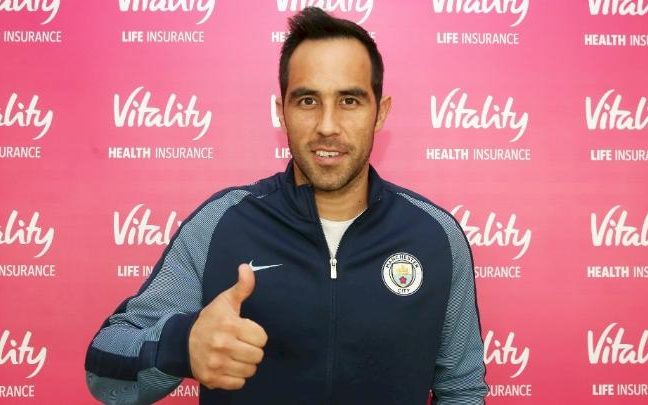 By speaking about the three strength Lionel Messi, Luis Suarez and Neymar the City goalkeeper told the guys are not only a great player also a great personality. Anybody could learn more from them. It really pleasure to play with them or play against them.

Chilean professional added that he was benefited by them as the teammates and now he going to play against them. As the three legend best in their place so it would be the tough to defend them.

Bravo termed he wished good luck for them. As they now separated, he did not want bad for the former employee. The 33 years old hopeful for the event and eagerly awaiting for the day. He hoped it would be some greater day.

Actually by playing with them he gathered much experience but first time he gonna be battle against them. And the stopper crazy to gather the experience.

We appreciate the guy for his no fear attitude which also inspired the other goalkeeper who scared to face the Barca for this three legend.

Claudio have commenced his club career in 2002 with Colo-Colo. He made his professional debut in the same year.In 2006 he able to win his first title with the team.

Bravo joined Real Sociedad ahead of 2006-07 campaign. His deal was completed for €1.2 with a five year contract. Barcelona appointed him for four years with a €12 million clause. This Summer he jumped the Nou Camp for Premier Club Man City. His move take place for £17 million by signing a four years deal. The Chilean was so desperate for the move. He told on media he made the jump to share the philosophy and playing trick of the team. He thought he was the perfect fit for the side rather than Barca.