Who’s the best striker in the planet? You may think twice before answering this question. But if someone asks you, who is the best number nine, in the EPL right now, you may not have think at all before replying “Harry Kane”. The England national football team captain has been prolific, in terms of goal scoring since the last half (more than) a decade. He is a top quality footballer who can score, can change the game and more specially a real match winner. Reports suggesting that, the Tottenham skipper is ready to leave the North London based side and the other clubs are preparing their bids to bring the in form forward in. 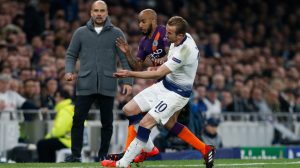 Both the Manchester giants are desperate to sign the 26 years old goal machine. Serie A giant Juevntus too is pretty much keen to land him to the Turin. But if they turn to the City’s Brazilian striker Gabriel Jesus, City may just let the Latin American go. On that case, they will try to purchase the Spurs’ captain. He may cost around 180 m GBP. But the Sky Blues will have to fight hard against their lifetime rival Man Utd. The Red Devils are also trying to snatch their key target to solve their final third problem.

Pep Guardiola’s side has kept Lautaro Martinez as an alternative option in their target list. If they fail to sign Kane, they may just turn to the Inter Milan’s Argentine sensation. The young goal machine has a release clause of 100 million GBP. Martinez has been in superb form for the Black and Blues. He has found the net on regular occasions this season. According to the famous newspaper, the Daily Star, Pep’s side will have to battle against Chelsea for the Argentine.

The Citizens have also put James Rodriguez in their wanted list. The Real Madrid play maker who has ended his loan spell with German giants Bayern Munich, may make his way out of the Santiago Bernabeu. David Silva is set to leave the Sky Blues after his long career at the Etihad Stadium. Thus there will be a vacant place in that position. The Spaniard has been very very crucial for the English giants and he only can be replaced by someone special. It is going to be tough to fill the hole, made by the departure of Silva even for someone like James. City’s target list also includes Ferran Torres, Sandro Tonali, Malick Thiaw, Houssem Aouar.