Manchester City is reportedly very close to sign the Barcelona goal keeper Claudio Bravo as the replacement of Joe Hart.

Actually the city’s first choice was  Ter Stegen but his unexpected injury kicks him away for a few weeks and now Bravo has been pushed for the deal.

Bravo’s release clause for the summer transfer termed around €42 million, where the bid for Stegen was set of 67 million pound for the stopper.  City are trying to pay the amount among 20 to 25 million euros. 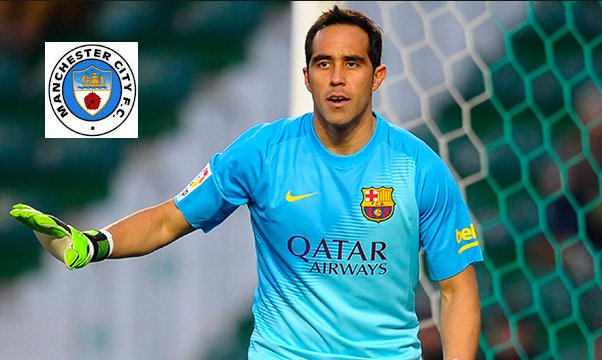 The agreement yet not confirmed but possibly the deal will be finalised ahead of the Spanish Super Cup against Sevilla Which will be played on Wednesday.

Bravo belongs to Chilean professional who joined the Barca side in 2014. He has been performing fabulous since past two years for the La Liga giant. He is more better than the Ter Stegen. Bravo is 9 years senier and experience than  Stegen.

Though the German stopper became the long term target of Pep Guardiola, now he have to pick the Chilean ahead of the Nou Camp.

Last two season Bravo has played 69 La Liga matches for the Spanish club, where he had shown a very powerful skill. The 33 years chilian is an outstanding shot-stopper and also a penalty saving expert at all.

According to report the Barca manager, Luis Enrique, wanted to keep both stopper in their side. Specially they had not wanted to release their most valuable and experience asset from the side. If they keep side away the goalkeeper from their side, they may be mulct for that.

Pep assured that they buy the Barca stopper, that means is not liked that they kicks away Joe Hart. They will be again cast Joe after Wednesday’s match. Joe is also a fabulous goal stopper and also expart of stopping penalty shoots. But unfortunately he has been thrown out from the City’s starting line up for Argentine Willy.

Pep mentioned that he had a lot of respect for Joe and his career. He became a good goalkeeper but the decision was totally taken for Willy.

He also added that had used a lot of playing formation as well as two-against-one, three-against-two, four-against-three, using the goalkeeper, but it doesn’t mean that Joe cannot do that. Willy had shown a mind blowing performance in the pre-season, which gave the coach much confidence. He has disclosed his playing personality and building-up play. That is the main cause why the boss chose him.