Marouane Fellaini has been ruled out from the Wednesday derby clash. He has injured during last match against Chelsea. The midfielder has been taken out of the field in half time for the tackle.

Fellaini attracted by David Luiz who raised the boot on high and hit on the Belgian’s knee. It’s a horror event and the Brazilian got a yellow card.

According to reports The Brazilian the f the boot caused a serious lump in his knee. The midfielder has been not sent for scan. It is also known to the reports he would now be sent for scan till his lumh has not down.

But the United boss Mourinho worried about the Belgian man he afraid the midfielder could be kick out for some weeks from the side. The coach really tensed about Wednesday’s match. The defence also suffering failings of Eric Bailly. He is also injured and not fit for play. According to reports the defender will not take part in the derby clash.  Marcos Rojo could be seen on the field. He might replaced Bailey on the Derby clash. 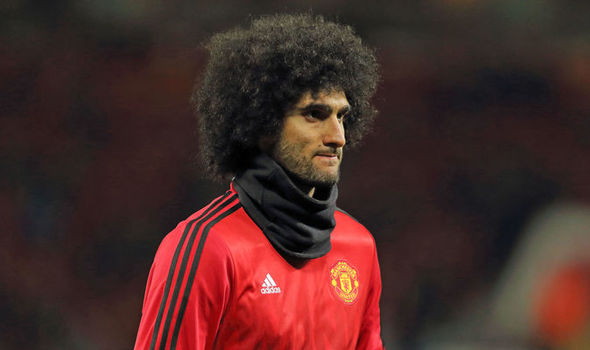 The Argentine is also very good defender but how he much he cover the Baily’s place that is the main fact of the event.

By the state of the reports along with Marouane Fellaini, Jesse Lingard will also not take part in the game. Mourinho set Michael Carrick who also the vice captain of the team as replacement of Fellaini.  The Portuguese boss trying to build the line up without the injured players but how much he could success in his plan.

Anthony Martial, Juan Mata and Michael Carrick has consisted in the panel of starting line-up. But Mourinho has picked the wrong player for the match. It would be very difficult to chase the game in their favor against an City.

Though Paul Pogba along with Zlatan Ibrahimovic are available for the match but the both superstar has not shown the the top level performance this season. Mourinho’s team is in the seventh position with 14 points where Man City leading the table with 20 point. It’s a big gap between the two rivals.

By playing 9 games The Red devils has won four match, where City won six clash. The City boss Pep Guardiola very confident for the match. They hoping to grab the victory. The two team are getting preparation for tomorrow night. Let’s see what happened. So guys enjoy the full event free online here in our site.