Manchester United goalkeeper duo Joel Castro Pereira has been sent Portuguese club Belenenses on a temporary loan. As we know the transfer window has closed and the move has of Joel taken place at the last moment.

According to the statement of United’s official site, Red Devils goalkeeper Joel Castro Pereira had agreed a loan move to Belenenses in the Reds’ final piece of business on transfer deadline day.

Pereira was on loan at Lisbon-based club, Rochdale  last season. He is called back last February by his parent club United for sitting on the bench. After that he received a loan call from Belenenses and the boss Mourinho immediately sanctioned the loan ahead of transfer window deadline. The 20 years old goal stopper has played for both youth sides, Portugal and Switzerland. 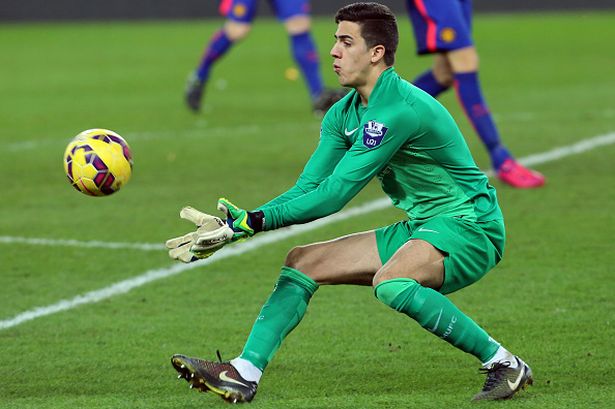 Not only Pereira also Dean Henderson has been also sanctioned loan for Grimsby Club. It is also a short term deal which will be finished in January. According to report it is a temporary departed and soon they backed their parent club.

It is learnt to the Mariners statement from official website that Grimsby Town Football Club has been signing a highly rated loan from The Red Devils in their side and he is none other than English under 20’s goalkeeper, Dean Henderson. They also announced that the deal has sanctioned till January 2017 and after that they have to loan back the goalkeeper.

Henderson is very talented guy so far. He became the part of Warren Joyce’s Premier League 2 side. For his mind blowing performance and activity he have get a recent called Up from England under-20 side.

Apart of them Mourinho has sanctioned five more loan over the transfer windows. Among of them Brazilian Andreas Pereira who sent to Spanish club Granada. Englishman  Cameron Borthwick-Jackson to Wolverhampton Wanderers. And also have few more names in the panel as well as Adnan Januzaj and Guillermo Varela.

It becomes the most happening season for the Mourinho’s United. They spent the full Transfer window quite busy by selling and buying players. They get included some biggest legend this Summer. It is hoped, with them the season will conduct a rocking year. The all attempt is only for the premier league Trophy. Mourinho’s focus is only the season league trophy and he organized the club according to the plan. He mentioned he is considering a vast plan for the future and it’s only about the side welfare.