The Sheffield United’s top flight young forward Dominic Calvert-Lewin is targeted by Manchester United. According to report, The Red Devils  are pondering of £1 million bid for the Sheffield youngster.

Lewin joined Sheffield in 2013 but he made his professional appearances on April, 2015. In 2014-15 he played total 2 matches but failed to achieve any goal. On that year he sent to Stalybridge Celtic on loan, where he made five goals in 4 matches.

The 2015-16 campaign he again backed on his parent club and made nine appearances but could not able to make single goal. After that he was loan moved to Northampton Town. In the side he could figure 8 goals in 26 matches. 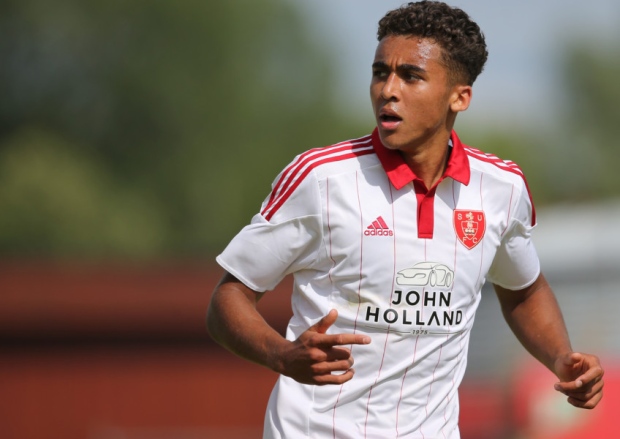 This season he rejoined Sheffield and played one game with zero score. The 19 years forward was also the target of English club Everton earlier in this summer. The Toffees are also sanctioned £1 million deal for the teenager but unfortunately the move could not taken place and the deal was cancelled.

The new boss Mourinho wanted to bolster their youth side and he also wanted to seized the squad with world ranking participants in the Premier League International Cup in 2016-17 campaign. That’s why he is so desperate to cast the youngster Calvert-Lewin. He believes as a teenager he is so powerful and strength and he has the ability to develop the squad.

On the other side Sheffield United manager Chris Wilder is searching more experienced footballer for the upcoming season to assist and guide the Bramall Lane club.  That’s why he interested to move Calvert-Lewin on loan.

Mourinho has already sealed some exclusive performer in this Summer like Paul Pogba, Eric Bailly, Zlatan Ibrahimovic, Henrikh Mkhitaryan and yet searching the best for his club.

He also dealt with many youngsters for the side. He thinks Calvert-Lewin only the man who can boost to salve the poise players,  had fled away this season.  He just want to confirm the deal by any means constantly or on loan. The loan deal is much better option than buying. Recently they completed the world record breaking transfer of Pogba for £110 million.

There are no issue has learnt from the the the Sheffield side and the Dominic has not made any comment also. It has full chance to complete the move. Undoubtedly Dominic is an outstanding forward but his appearances for the Shuffield was not so successive. Hopefully he could do well for Man United and could hedge Mourinho’s expectancy.