Manchester City’s talisman Sergio Aguero has been banned for the next four matches after seeing red card against Chelsea. On an important clash between two rivals the Blues came victorious after beating the Citizens 3-1 at the Etihad Stadium. But City forward Sergio Aguero & midfielder Fernandinho are the headlines of all the newspapers & websites as they have been handed 4 match & 3 match suspension respectively.

On the Saturday lunchtime clash between two rivals, the visitors secured very important 3 points which took them clear 4 points ahead of their counterpart. Although the host team was leading after the first half with an own goal of Chelsea’s Gary Cahill on the 45th minute. Diego Costa levelled the line on the 60th minute. Brazilian winger Willian gave the visitors the lead on the 70th minute. On the 91st minute, Belgian winger Eden Hazard sealed the game for the Blues. 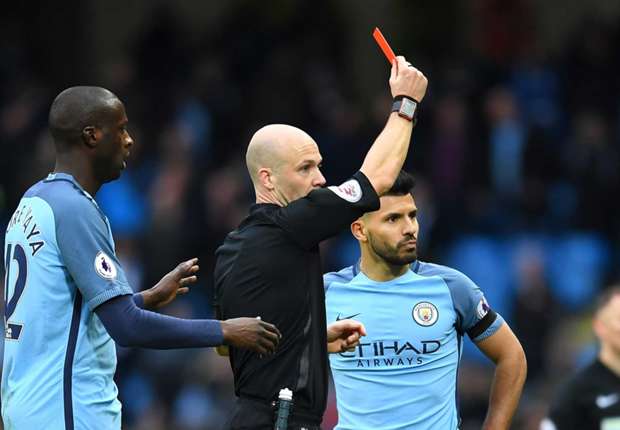 The Argentine is set to miss the next 4 important premier league clashes. Aguero will miss the trip to King Power stadium for premier league match against defending champion Leicester City on December 10. Then he will miss the two consecutive home clashes against Watford & rival Arsenal. The suspension will be expired after an away trip to Hull. The 28 years old will be back in time to play against Liverpool at the Anfield, which is City’s last match of the year.

The 28 years old attacker was previously suspended once this season before this incident. He was suspended for 3 matches after elbowing West Ham defender Winston Reid. He missed the Manchester Derby on that occasion. This is the second time this season he has been handed suspension for being involved in violent on the pitch.

The Blues have placed them strongly at the top of the table after this win. Antonio Conte’s team has earned 34 points from the first 14 EPL games. Pep Guardiola’s side has got 30 points from the very same number of matches. The Citizens will badly miss the Argentine as he is one of their best performers and already scored 16 goals for them this season.