The Red Devil boss Mourinho have recently made an official offered of €38 million for Brazilian forward Gabriel Fernando de Jesus who is simply known as Gabriel Jesus.

The attacker recently finished a successful season in Campeonato Brasileiro Serie A where he rocked the challenge by scoring 10 outstanding goals along with four fabulous assists. After the flawless performance along with Man United some more leading club as well as Barcelona, Real Madrid, PSG, Real Madrid showed a very strong interest to bag the youngster in their side. 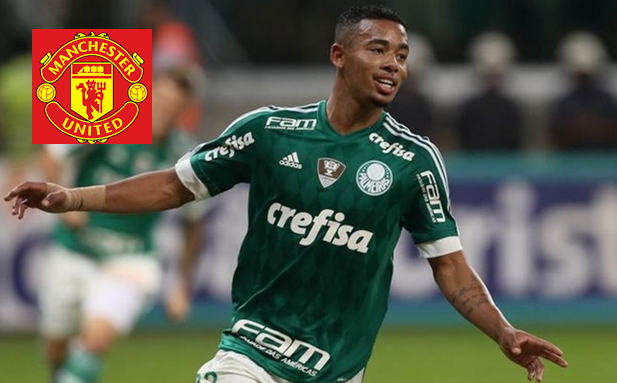 The winger just too fabulous in 2015 Under-20 World Cup which held at New Zealand. After his brilliant success he has been appointed as a constant inclusion in starting line up. Jesus emerged the team in final but unfortunately defeated by Serbia in final. For his mind blowing appearance he became a renowned youngsters in recent windows.

At present the forward plays for Palmeiras and not only United also the Man City side also desperate to cast her attacker in their side. The deal almost done with City but Mourinho’s team tried their best to grab him on their side.

Jesus’s agent Cristiano Simoes who had made an announcement that The Palmeiras forward  had not interested to move anywhere and now he mentioned that he is on the way to confirm the deal with Man City who are dealing with contractual issues.

On his word they were defining some contractual issues with City and they were dealing with that. It is learnt to the source The Citizen has been offered a €32 million bid for the Brazilian striker.

Now the fact is that if the Mourinho wanted to cast the Brazilian on their side he have to convince Gabriel so far. And they have to increase their bid against The Citizens.

On the other side the Palmeiras coach Cuca termed that he had not interested to sell the brazilian star right now. He wanted to keep him the forward in their side over the year.

At present the United boss facing some complication after defeating by Borussia Dortmund in first friendly and second friendly against City was also abandon for Weather issues. Now the back at home and taking preparation for the next friendly.

The Pogba deal yet not completed and they has been added 10 million more euros on Pogba’s bid.  Mourinho’s target just boost out the upcoming season and he has made record break proposal for Juvi forward Paul Pogba.