In form Man United midfielder Marouane Fellaini who is in the form of his life as he is currently playing his career best football at the Old Trafford under the Portuguese manager Jose Mourinho. The midfielder has been impressive in this ongoing season as he is in incredible run of form for the Red Devils. He has found the net on regular occasions. In his last match for the United, he scored a match winning brace over the Eagles in Utd’s 4 goals victory at the home. He also earned the match ball as he was named the man of the match on that occasion. 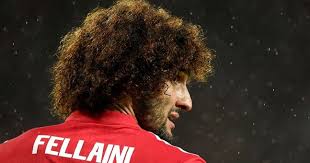 The afro hair styled footballer suffered a knee injury during his national duty for the Belgium National Football team against Bosnia and Herzegovina. He actually was the victim of a dreadful pitch condition. The Etterbeek born footballer was carrying an injury and missed a training session earlier in the week. But his national team head coach Roberto Martinez took the risk to play him and he was named in the starting xi. The former Everton Boss was criticized for playing him as it was quite a valueless match for the Belgian Red Devils on the pen and paper as they had already qualified for the 2018 Russia World Cup.

United fans wouldn’t take the blow lightly as Fellaini is in good run of form. Although they used to boo him previously, the versatile midfielder has impressed them with his tremendous footballing display this season. The most successful English club in the Premier League history will face their lifetime rivals Liverpool in their very first game after the international break. It is going to be their biggest test so far in the campaign and they would certainly miss the injured man, if he fails to recover in time. The 29 years old who will turn 30 in the upcoming November has been very crucial part for his club. The Special One labelled him as an essential part for his side. The last 46 games, in which Fellaini appeared for United, the Red Devils have just lost 3 among those clashes and it proves how much important he has become for the team.