Manchester United is the most successful Premier League club and one of Big Four team. They won highest number of Premier League title but since few years they could not grab the title once again. In last season, they went too close to the title and finally finished the season standing on 2nd position. They gathered 81 points totally where the top point holder team achieved 100 points so far. Now, the new season of Premier League started and Manchester United started new season with victory. Their inaugural match took place against Leicester City at the home venue of the Red Devils named Old Trafford. 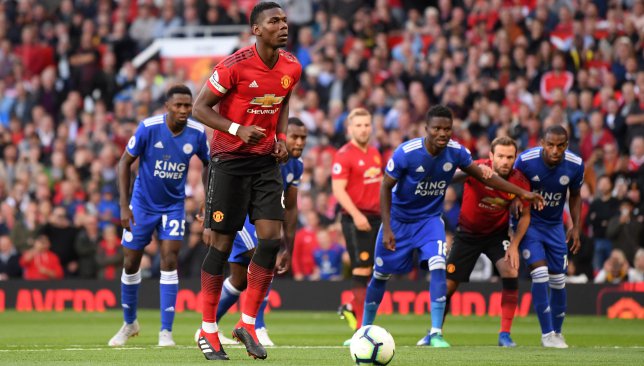 Earlier the season, Manchester United played International Champions Cup where they played three matches. They won against Milan and Real Madrid there but faced defeat against Liverpool. They also played a club friendly against Bayern Munich where the Red devils was defeated by 1 – 0 goal.

However, the team of Jose Mourinho successfully started the new Premier League season. In last Friday at the Old Trafford, they scored two goals in return of one goal. Paul Pogba and Luke Shaw scored one goal each for the team Manchester United. Later, Leicester City star Vardy reduced the goal difference.

The World Cup winner French midfielder Paul Pogba made a successful spotkick and so, in 3rd minutes of the game team Manchester United went ahead. The shot of Sanchez was touched by defender Amartey and so, referee gave penalty.

However, within very short time Leicester City returned to the game and took control as well. In 28th minutes they could bring balance. But the English midfielder Maddison who joined at the club in last June, took a speedy shot but stopped by the goalkeeper David de Gea. First half ended with 1 – 0 goal. De gea once again saved the local team in 75th minutes. English winger Gray made a volley but stopped by the Spanish goalkeeper.

In 83rd minutes of the game, along with the increasing of the goal difference the Red Devils almost secured the victory. This time Luke Shaw scored the goal. Juan Mata passed the ball into the box but at the first time the engine defender failed to control it but suddenly he escaped the opponent defender and scored his first goal.

In the additional minutes of the game, Portuguese defender Ricardo Pereira made a shot but stopped by the crossbar and in return ball the English forward Vardy scored the goal by head. Leicester City thought to draw the match but in rest of the time the champion of 2015/16, failed to score the balancing goal. So, local team Manchester United left the ground with victory.