Marc Marquez won the World MotoGP Championship for third time. The Spanish Rider grabbed the Japanese Grand Prix and secured his third World MotoGP. He parted from Repsol Honda Team and finished the race in 42 minutes 34.610 seconds. The Spaniard finished the 24-lap race in that time and hold the first place.

Marquez started the day with 52 points where the Yamaha pair Valentino Rossi 66 and Jorge Lorenzo 75. But their unwanted crashed cleared Marc path and he won the race gradually.

Rossi’s race was quit by 19 laps remaining. His bike slipped down and he was out from the competition. Lorenzo also slipped only five laps to go and both Yamaha Rider kick out from the race.

However the third victory was awesome for the Spanish rider. Honda rider Marquez, is very young and to win the third MotoGP title in that young age really very honor for him. 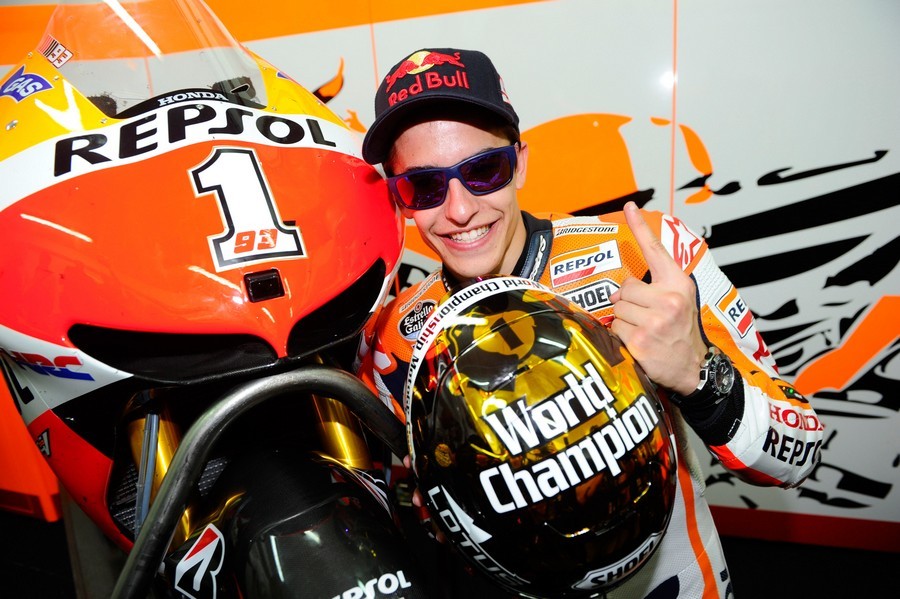 He is very happy for the victory and with the team. He mentioned that it was very tough to win the race. It was not easy to concentrate the race after crashing out of Rossi and Lorenzo. But he sensitively control himself and finally able to finished the rece.

In 2010 he won the first Moto2 title Along with 125cc. After two years, in 2012 he grabbed the Moto2 World Championship titles once again. And this season he showed of a very brilliant job. In such a young age he has taken part for five times in the world championships. It’s really a amazing matter and would be the ideal for any riders.

Andrea Dovizioso got the second place by 42 minutes and 37.602s. He was also good rider from Ducati. But the fact if Rossi and Lorenzo had not crashed out the result would something different.

With 42 minutes and 38.714 seconds  Maverick Vinales finished the race and got the third place. It was just 4.104 second from the Champion. The Suzuki Rider was damn good in his performance.

With Dovizioso and Maverick Vinales the podium has been completed. The one more Suzuki rider Aleix Espargaro grabbed the fifth place behind of 4.726 second from the winner. LCR Honda’s Cal Crutchlow was the frontrunner but he completed the competition as the fifth finisher.