Honda’s MotoGP rider Marc Marquez who is Spanish in nationality and have won the MotoGP world championship three times is continuing to dominate on the track as he has beaten his closest opposition Yamaha’s Jonas Folger and has won the German Grand Prix in 2017 and has moved to the top of the standings table.

From the starting position, Marquez did a very strong start and he enjoyed it. But just after the starting he had some unexpected competition from a German rookie driver. The Spaniard has won his 5th MotoGP race in a row in this very venue and has beaten Jonas Folger of Yamaha who kept him in pressure for some times. Whatever, Honda’s Dani pedrosa has ended his race being in the 3rd position and eventually passed a good day. 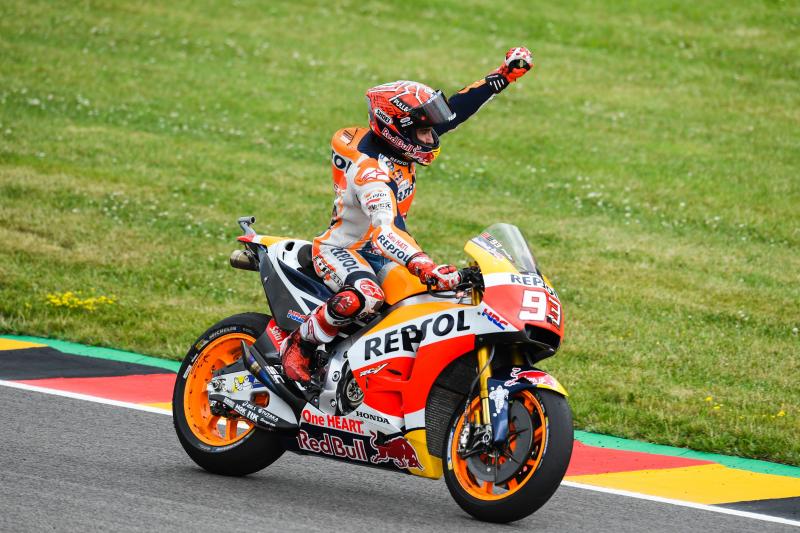 So, the result of German grand prix have brought the top four rider of the 2017 MotoGP championship very close to each other as all of them as Marc Marquez, Maverick Vinales, Andrea Dovizioso and Valentino Rossi are in a only 10 points range between them. The updated standings after the German grand prix looks like this: 1. Marc Marquez with 129 points, 2. Maverick Vinales with 124 points, 3. Andrea Dovizioso with 123 points and 4. Valentino Rossi with 119 points.

It is clear that Marc Marquez has been winning in the German Grand Prix for many years now and he can easily be called the king of the german gp. Marquez has done a brilliant job there and also his team mate as Dani Pedrosa was being in the second spot for some instances.

But back in the track, Jonas Folger was making his way to the third spot by overtaking Jorge Lorenzo which was very much entertaining to the crowd. At that time when he crossed Lorenzo, only the two Honda racer was ahead of him. The german then amazingly glided past Honda’s Dani Pedrosa and his Honda fellow Marc Marquez, the crowd bursts into cheers as Jonas Folger was the local boy.

Jonas was superbly riding at that time. But, when almost 10 more laps were remaining, Jonas Folger committed an error and with that chance Marquez went up ahead of him and he could not overtake him no more. Marquez increased the lead as he was riding amazingly. But, after some instances Jonas was seen cutting the lead off a bit. But, finally he could not catch up with Marquez and finished the race being second. Dani Pedrosa, the another Honda rider finished his race being at the 3rd position.