Antonio Conte would be relieved after a very crucial victory against rival Tottenham Hotspur. The English Premier League title holders got a shocking start in this campaign. The champions were down to the newly promoted Burnley side at their own home ground in their very first league match. 3 first half goals from the Sean Dyche’s lads saw the Blues in a position of bother. Sam Vokes scored a brace and the Blues were down to 9 men as their English Centre half Gary Cahill and Spanish midfielder Cesc Fabregas were shown red card and the fans couldn’t actually digest the unexpected defeat and the Italian manager Antonio Conte was under pressure straightway. 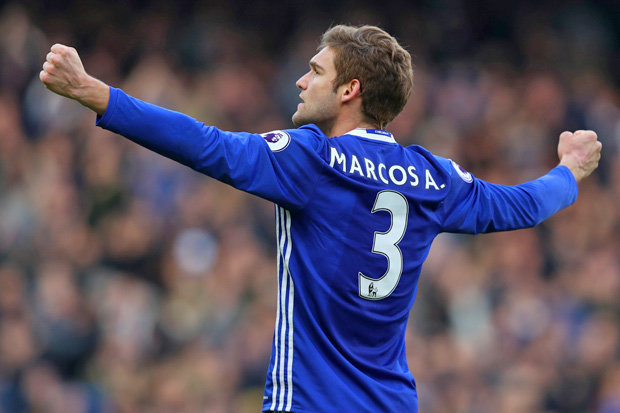 The title holders visited their city rival Tottenham on the Sunday afternoon to play their second league clash of the season. The teams from the capital of England, took on each other at the Wembley Stadium, which is at the heart of the city. Mauricio Pochettiono named a very strong line up against the All Blues but Chelsea boss Antonio Conte was without some of his key players as Cahill and Fabregas both missed due to suspensions and their talisman Eden Hazard is yet to recover fully from the injury.

So the hosts were considered favourite before the clash but a Marcos Alonso special was on the way to give the visiting fans an occasion to celebrate. The full back joined the EPL giants last season from Italian Serie-A club Fiorentina. On his debut season, he put his name in the score sheet on 6 occasions. The Spaniard has got an amazing start in this campaign. The right back has given the champions their first victory with a very important brace against a strong opposition.

The 26 years old opened the scoring on the 24th minute to give the touring side an early lead in the first half. No more goals were scored in the first half and the first half ended with the one goal’s advantage for the Stamford Bridge based club. The home side got the leveller on the 82nd minute thanks to Michy Batshuayi’s own goal. The Belgian put the ball into their own net. Both the teams might have got one point each from the match but Alonso once again came ahead as the saviour of his side as he scored the winner on the 88th minute. The game ended with the 2-1 victory for Chelsea and it handed them their very first victory and it was also the first defeat for the Spurs.