Barcelona right back Martin Montoya has signed a four year contract deal with  Valencia. According to report the deal has confirmed on 1st August after expiration with Barcelona side.

The 25 years Spanish was linked with Catalonia at age of eight. In a word he has started his career with the team. In the year 2009 Montoya has been flourished to Barcelona B team. After a two years later he joined in the major team.

This Summer his Barca has been cancelled the all past agreement with Martin and announced he was free from all contract. 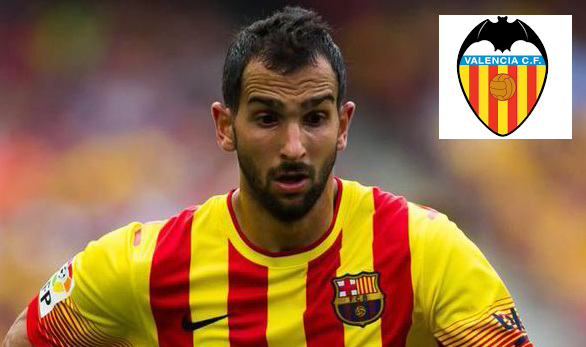 In an official website they announced that FC Barcelona and the player Martin Montoya had agreed to cancel the contract between the both parties. They also wished the defender great success in the next stage of his professional career and life.

This weekend he made an official approach with Valencia and will stay there till the year 2021. After completing the agreement the Valencia club posted a statement on their official website they mentioned that Valencia CF and Martín Montoya had reached an agreement for the player to join the club on a four-year deal.

They also added that Montoya had come up through Barcelona’s La Masia academy and had debuted for the first team against Mallorca at the Iberostar Stadium.

The Spanish international is a well experienced right back so far. Last year he was connected with Liverpool but at last moved to Inter Milan on loan. After that in January he was recalled by Barcelona for Serie A ahead of transmitted to Real Betis for the 2nd half on season loan.

The 25 years right-back has been represented Spain at the age of under-21. In every side whatever International and Club he always gathered a good impression. For Barca he made  66 appearances with the score of twice. For the backer it is too amazing and quite difficult to approach this honor. He always made a great wall in back line and it is too difficult to cross the line for opposition.

This a numbers of players are released from Barcelona side as well as Alves,  Alex Song, Sandro Ramirez, Adriano, Marc Bartra and Alen Halilovic. Among of them Montoya became the latest one who left the Luis Enrique club. One side Barca defender joined in Valencia club on the other side Valencia midfielder Andre Gomes joined in Barcelona side. But Luis Enrique clearly notified that there would be no relation to the both deal which happened with Andre Gomes and Martin Montoya.