Bangladesh grabbed the second One Day at Mirpur and the captain became the player of the match. Last match he broke the England top order collapsed with the great spell of batting and bowling Storm. Now the captain is the second most Man of the match in Bangladesh One Day format. He touched the honorable position in 11 times.

Tamim touched the captain in the final ODI against Afghanistan where the two man scored ten times. But Sunday match left Tamim beyond of the skipper. He is leading with eleven times. The world’s best all rounder Shakib Al Hasan grabbed the title of Man of the for 15 times. Where Tamim got it for 10 times and Mohammad Ashraful for 7 times. 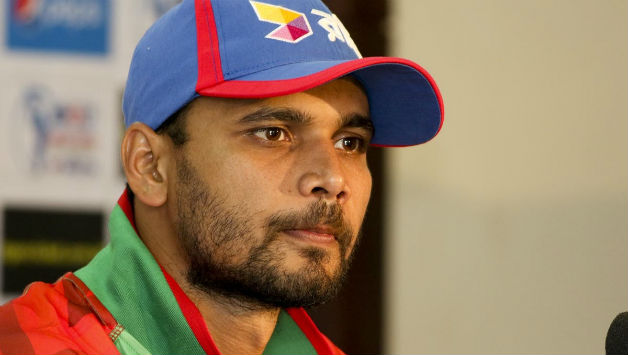 By winning the toss England decided to ball first. By batting first Bangladesh earned 238 and threw 239 run target to the opposition. The opener Tamim Iqbal was caught at 14 runs and the the Kayes who made century in last ODI, scored only 11. Mahmudullah made the scored 75 which was the highest score of Bangladesh side.

When Bangladesh losing their game control, then the skipper hold the rope in tight. He shown the outstanding performance and once again proved his ability to world. By batting he gathered 44 runs within 29 balls. He was run out by the opposition captain Butler.

Not only batting in balling side the captain shown flawless performance. He picked total 4 wickets by balling 8.4 overs. He took the first two batsman’s wicket JJ Roy and JM Vince. Thae third and fourth wicket were taken by Shakib and Taskin respectively. Mashrafe took two more wickets of BA Stokes and CR Woakes. It was totally amazing to see. He played like a tiger and however snatch the series balance 1-1.

The captain was the player of the match in 2010 when they defeated England in World Cup for first time. Then he had taken two wickets and did 22 runs at Bristol. Once again he did the same sort.

Mashrafe became Man of the Match against India for the first time in 2004. It was the hundredth match of Bangladesh. He had picked the two important wickets of Virender Sehwag and Mahendra Singh Dhoni with an unbeaten 31 score.

The last player of the event title had been achieved in 2014 by the skipper. After a two years he got the honorable title. After Zimbabwe he got that against England. Overall in the three format Shakib leading with 22 times. Where Tamim in the second position with 14 times. The captain just behind of 1 title than Tamim.