After the 5-0 whitewash in the African soil the super power of cricket, the mighty Aussies are on the verge of first ever home series white wash in the longer version of game against the Proteas. The Successors of Sir Don Bradman, Allan Border, Mark Taylor, Steve Waugh, Ricky Ponting etc. have fallen apart already twice in the ongoing series against the in form Proteas.

After that horrible 5 match ODI series whitewash Proteas are currently touring Australia. In the series opener in Perth, Proteas were 81 for 5 at one stage & were packed in 242. David Warner & Shaun Marsh gave Australia a flying start with a 158 run opening partnership but the Du Plessis’ soldiers came back in style & thrashed the Aussies with a comprehensive 177 runs victory. In the 2nd test it got bad to worse for the Aussies. The Kangaroos had no answer for the Protea duo Kagiso Rabada & Kyle Abbott. Australian batsmen were all out for only 85 in the 1st innings of the Hobart Test. The next big thing considered in African cricket, Quinton De Kock scored a magnificent century & gave Africans a 241 runs lead. In the 2nd innings Aussies lost their last 8 wickets for only 32 runs. African guys give their team an unassailable 2-0 lead in the series. 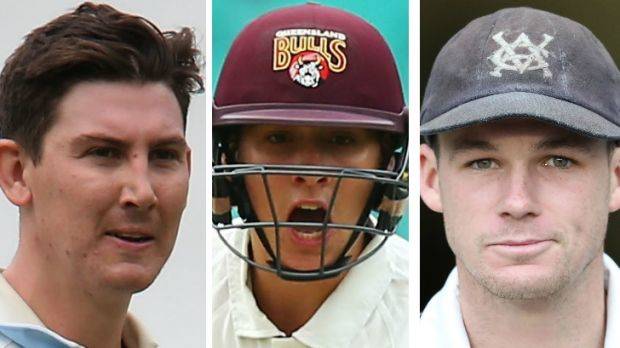 All these things made impact straightway on the Aussie side. Chief Selector Rod Masrh resigned & he has been temporarily replaced by Trevor Hohns. A massive change was certain & having gotten the job, the queensland born former Australian international didn’t take long time to make changes in the Aussie side. He immediately dropped 5 players of the last test’s playing XI. Only Captain Steve Smith, his deputy David Warner, pace bowling duo Mitchell Starc, Josh Hazlewood, Queensland captain Usman Khawaja & experienced off spinner Nathan Lyon has been recalled to the squad, as expected. 4 very new players have been added to the 3rd test squad for the very first time in their career. The other 2 members of the squad were Tasmanian fast bowler Jackson Bird & Victorian wicket keeper batsman Matthew Wade.

20 years old Queenslander, Renshaw has scored a brilliant century against South Australia in the very latest round of Sheffield Shield just before the 3rd test. In the 2nd innings he again scored a 50 & helped his team getting a 128 runs victory. 25 years old Peter Handscomb must have seen the selection axe of the national test team squad & didn’t miss the opportunity & made the selectors bound to select him with his Incredible 215 against the strong NSW side. Handscomb is also a wicket keeper but may not be given the extra duty so early & Matthew Wade will probably stand behind the wicket in the Day-Nighter in Adelaide.  24 years old NSW batsman Nic Maddinson is not a complete new face in the international arena as he has experiences to play in 2 T20I matches. Nic was brilliant throughout the season & continues his Matador One Day Cup form in the Sheffield Shield too. 29 years old South Australian pacer Chadd Sayers is one of the most impressive bowlers this season. Recently he has taken his career best 6/32 against Tasmania to bowl them out only in 98 & in the 2nd innings he took another five for to give his team an innings victory.

Changes in Selection Panel, Changes in the squad for the off form Aussie side. Now the question is, can the Aussies prevent the first ever Test white wash  in the home soil? The answer will be there after the final day-night test of the series which is going to be started on 24 November.