A rumour about Arsenal’s newest addition has recently spread out. It says that, the Gunners are going to tie a Argentine striker this time which will be their 3rd contract this season under the charges of Arsene Wenger and one of the big signing. Argentine striker Mauro Icardi is the prime target for now who is currently playing for Italian side Inter Milan. In this circumstances, Icardi’s wife Wanda Nara who is also his agent is flying to London where the Gunners have invited her to discuss about transfer fee. 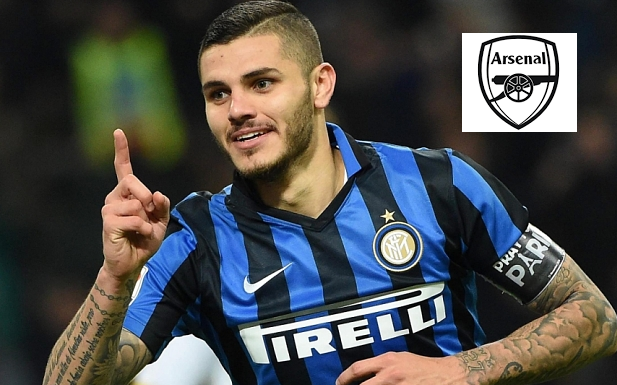 But before, Arsenal were keen to recruit Higuain where they failed to made a settlement due to Napoli demanded so much around £78 million. While failing to get Higuain, they are now keen to collect Icardi instead. This Argentine striker has revealed a very clear shot that he will leave the San Siro if he will receive a right package. He has claimed £40 million about his transfer to join the Emirates Stadium, according to the report.

Besides the Gunners, Italian top tier Juventus and Napoli are also keen to collect this promising striker. So, Arsenal boss Wenger would not leave any chance to them and would probably meet his demand as well.

This 23 years old Mauro Icardi, began his journey with a senior club in 2012 named Sampdoria where he made 33 league appearances and scored 11 league goals so far. Icardi joined Italian Internazionale in 2013 for €11.7 million reportedly and till now he played with 88 league matches and scored 47 goals. Due to his amazing performance in last Serie A season 2015/16, where he achieved 16 goals by playing 29 appearances, many clubs were impressed by him.

As to tie him up, Juventus and Napoli are still trying but Arsene Wenger is one step ahead of them and this young forward would very much like to join with the Gunners this time. His wife is currently working on this deal as his agent.

He was the top scorer of Serie A in 2014/15 with 22 league goals and also selected in Serie A team of the year in the same year.

Mauro Icardi is currently playing for Argentina international where he joined there in 2013. Though, he has played only one match against Uruguay in 15th October, 2013. He was also listed in Copa America Centenario 2016 preliminary squad by Gerardo Martino. But did not get chance in main squad. Now, he is going to play in upcoming Summer Olympics which is going to be staged in next August, 2016 in Rio de Janeiro, Brazil.