Lionel Messi, Cristiano Ronaldo and Neymar are on the short list of FIFA World Player of the Year 2017. Luis Suarez and Januławi Buffeen have also included in the list. FIFA sanctioned total 24 players name whom are really deserve the honor.

In the last nine years, the player of the year’s winner could not win without Messi and Ronaldo. The Barcelona star has won five times and the Real Madrid star won four times the title. 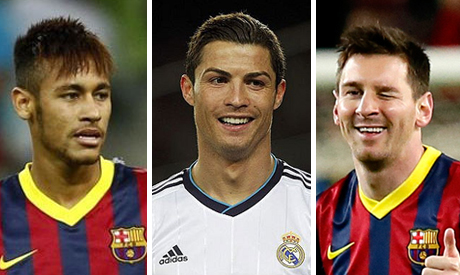 However, If the Portugal star will get the trophy he will able to break the record of Argentine Messi.

Ronaldo touched the milestone record of 100 goals in this season as the first player in the history of Europe. He also scored 12 goals, including two in the final of the Champions League this year.

Messi has lesser success than Ronaldo, but the Argentine captain has done a great season this season. He has done milestone of 500 goals record in the club football career. He being the highest goalscorer in the Catalan club.

According to statistics, Neymar’s achievements were not so much like Messi or Ronaldo. But despite of this he being very good player of team Brazil.

And as always, Buffey has done a great job this time, The Italian goalkeeper made a big contribution in Serie A and Coppa Italia win. Until the final in the Champions League, his team had digested only three goals.

The players’ acquisition will be counted from 20th November 2016 to  2nd July 2017. In the mid of September, the list will be dropped by three to FIFA. And the name of the winner will be announced in London on 23rd October.