The new FC Barcelona signing Ousmane Dembele makes his debut for the new club on the Saturday night when the Catalans came head to head their city rival Espanyol in a crucial La Liga match. The local derby was held at Barca’s territory Camp Nou Stadium and it was completely a horrible one for the visitors as they were destroyed by their counter parts. It was a great occasion for the Blaugrana fans to remember as it offered them too many things.

It was a day to remember for the French winger. He came to the pitch for the very first time wearing his dream club’s jersey. But as usual, Leo Messi keeps ruling the Camp Nou and even on a special occasion of his new comer team mate, he stole or more clearly snatched the spot light by scoring an incredible hat-trick. It was the very first hat-trick of the campaign for the Argentine, who recently got married to his girlfriend from the boyhood, Antonella Roccuzzo. After two first half strikes including an absolute cracking day opener, the 5 times Ballon d’Or winner completed his hat-trick on the 67th minute. He once again showed how good he is and nothing could be a better gift for his new team mate. 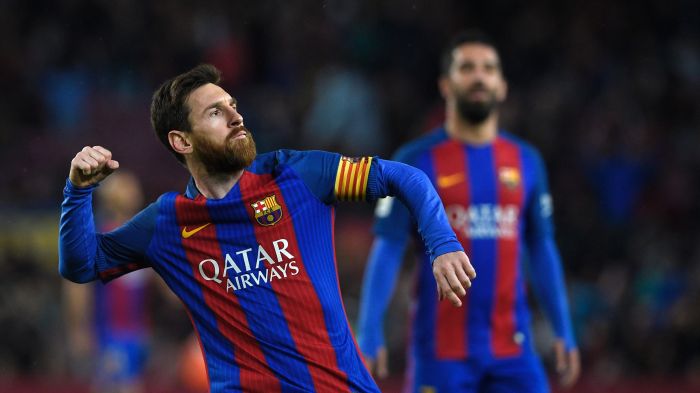 Former Everton attacker Gerard Deulofey started along with the deadly duo Messi and Luis Suarez. All the Barcelona fans who were present at the Nou Camp, stood on their feets when Dembele replaced Deulofeu on the 68th minute to make his debut. The France international’s new home ground didn’t disappoint him as it welcomed him very warmly and the young sensation also didn’t let his fans go with empty hand. He showed some of his skills and provided a gorgeous looking pass to Uruguayan number nine Luis Suarez. Suarez didn’t make any mistake to convert it into the 5th goal of his side and the new ace got his very first assist for his new team.

The Blaugranas went to the top of the table straightway with 9 points which they have earned from the 3 consecutive wins. Real Madrid once again didn’t find the victory as they were held by Levante. The Los Blancos are now at the 7th position in the Liga BBVA table with 5 points after two draws on the trot. Ernesto Valverde expressed his happiness after the victory. He thinks it’s a very good feeling to stay ahead of Real Madrid although it’s still a very long way to go in the season.