The Greek striker Kostas Mitroglou has signed a long season contract with Benfica in permanently expecting loan session. The deal is confirmed till 2020 for £45 million. Mitroglou seemed very happy for the deal with Benfica and recently he tweeted a conversation where he wrote that to come to the Benfica side had been the best option for the forward and he has wanted to stay there.

The Fulham was taken the winger on loan at beginning of the year 2014 for four and half years from the Olympiakos club and the forward was bid for £12 million which was highest deal in Fulham history. Causing of injury the deal could not be completed and he performed only three matches for the whites. 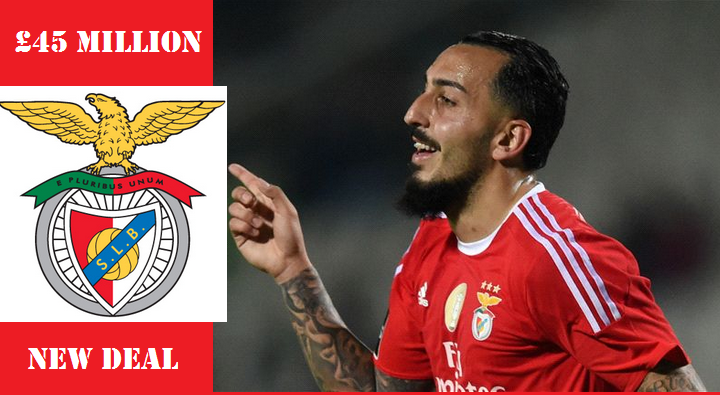 After recovery he backed his former club which has sent him Benfica  for a season-long on loan. But the sudden four years signing contract fall down the Fulham Football Club a big loss which spent £12 million for Mitroglou in two years ago in January. Now Kostas set on Benfica side permanently and the transfer activity already completed by the respective club and they exercised the €7 million buying option for the forward.

In a press conference Fulham manager Kit Symons admitted that there has no problem for the team to join his in a new team, actually he was happy for Kostas to join new club.

But some times ago Symons was mentioned that the rumour of moving was not confirmed it’s all about feasible. On the statement he also commanded that it was a great opportunity that Kostas going to be off on loan in shortly with Benfica.

He also claimed that it’s not disappointing at all. On the speech he told that the 24 years forward wanted to play for Fulham football club if they can able to place in the Premier League emulation and Kostas is not interested to take part in the Championship. Kostas enjoyed himself during the training session in the training camp in summer and hoped to get his wish that they would be promoted. He also assured that the striker could play for Fulham the next season English Premier League competition.

The forward, who is existed on a season long loan for Benfica side was also targeted by some major European clubs as well as AC Milan, Arsenal and few more others. The scoring of 23 goals in 43 appearances has been upgraded the demand of the portuguese giant.

Though Mitroglou had made only three appearances during the Premier League which held on two years ago but he had proved himself in the competition.

For his outstanding performances his demand rapidly growth in the premier league club. Specially his great appearances on January against Arouca was damn good and help the team by winning a 3–1 goals differences. On February his great hat trick gave the team one more biggest victory of 5-0 goals.

However, after a long time Mitroglou finally permanent for some club. Since early he has been transferred from one club to another on loan and he is pleasant for that.