ICC Champions Trophy is knocking at the door and the teams are participating in the warm up games. But the host England and the tournament favourite South Africa are taking on each other in a bilateral ODI series ahead of the CT. It was going to be a cracking series as both the teams are in very good form. England has been overwhelming at the home since their evolution after the disappointing 2015 ICC Cricket World Cup. The visitors are also very good side both away and home and are currently at the number one position in the ICC ODI ranking.

The hosts got a convincing 72 runs victory over the Proteas in the very first ODI of the series. After winning the toss at the Headingly, Leeds, Protea skipper AB De Villiers sent England to bat. They got a superb start as Jason Roy was dismissed in the very second over of the game as left arm seamer Wayne Parnell sent the English opener just for 1. Then Alex Hales and Joe Root built a 98 runs stand to take their team into a comfortable position. But then the duo went in quick succession and Stokes and Buttler too fell early and the hosts found themselves struggling on 198 for 5 on the 35th over. 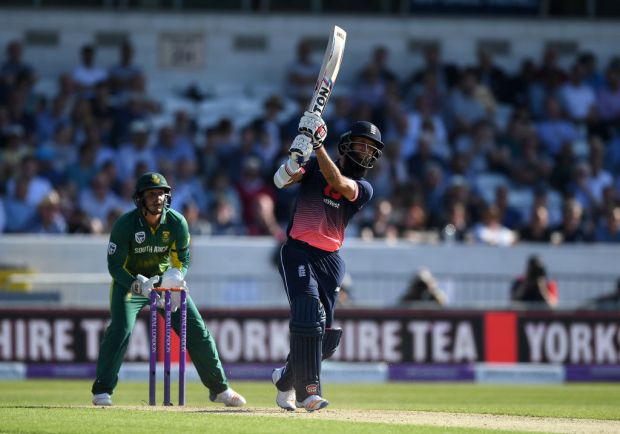 But captain Eoin Morgan and number 7 Moeen Ali made a brilliant 117 runs partnership to reach a very competitive total of 339. Morgan scored 107 off just 93 and Mo scored a blistering 77 not out off just 51 deliveries. Both of them hit 5 maximums. Chris Morris and Andile Phelukwayo grabbed two wickets apiece.

In the reply, Hashim Amla seemed to be in good touch as he thrashed Mark Wood for some boundaries. But Chris Woakes found the rhythm and sent Quinton de Kock back into the hut as the left handed wicket keeper batsman was struggling in the 22 yard. Amla and Du Plessis both had reached 50 runs landmark before the former went for 73. Du Plessis followed him early. JP Duminy too didn’t stand long. Out of form David Miller hit a big six but a poor shot in short pitched delivery of Woakes, saw him heading towards the pavilion. Chris Morris went for a reverse hit and lost his wicket very cheaply. The last hope De Villiers too found the man in the deep and the home side got a comprehensive 72 runs victory. Moeen Ali was awarded the man of the match trophy for his all round performance both with the bat and the ball in hand.