Yamaha rider Valentino Rossi thinks that Marc Marquez of Repsol Honda himself is the only one who should get credit for his standings in the MotoGP points table now ta the midway of the tournament. The Italian thinks believes that Marc Marquez was the best as he lose some point than the others and the full credit goes to him.

There are 9 more races to go for the ending of the championship and at this point and Repsol honda’s Marc Marquez holds an important five points advantages from his nearest opposition in the points table as he owns the points chart by being at the top. He grabbed his second win of the season which was in Sachsenring in the early phase of this month. 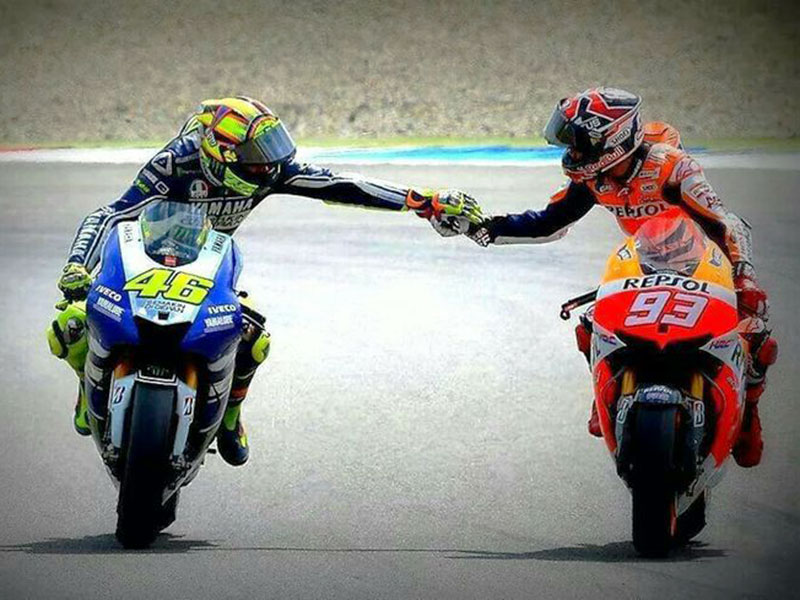 However, Valentino Rossi, his Yamaha team mate Maverick Vinales and Andrea Dovizioso these three are within 10 point difference from the possible champion Marc Marquez. And  Mrquez’s team mate from Repsol Honda Dani Pedrosa is also following Marquez from a distance of 26 points.

It is a matter of fact that, Marc Marquez has suffered crashes in Argentina and Le Mans but despite them he had manages to reach to the podium five times and has not finished lower than fifth for a single instance in the whole season. And this had enabled this Spaniard to lose some point than any other racer in the championship in this season. On the other hand Rossi and his team mate Vinales both has finished in the podium four times and they have finished lower than 10th position at least for once and have lost more points than the topper.

Valentino Rossi thinks that the reason behind Marquez’s success is the ability of him to bring out a good result even when he goes through a bad patch and that has helped him to be in the commanding position in the championship point table. Whatever, now being in the middle part of the championship, Rossi becomes adamant that there will be no favorites in the second phase of the tournament after the summer break.

Rossi said about Marquez that the Spaniard Repsol Honda is leading the standings because he had managed to lose less points even while he was suffering but Rossi said that they had lost more points than Marquez when they were in a suffering stage and that has created the difference.

He also said that the Spaniard has a very strong nerve and he made sure to win when he needed to win and he also limited the damage to the points when he could not win. And that is the reason why he is in the top.

Rossi stated that at this time the riders who are fighting over the title of the World Championship, all of them are equally strong and they are on the same level and any one of them has the potential to snatch the trophy from the others. He added that there is no favorite in the names as well and Dani Pedrosa is not very far from them and he can also be a champion.