MSN the most deadliest trio in the football world found the net against Villarreal to send Barcelona at the top of the La Liga table. Barcelona’s footballers are currently at the top of their form after defeating life time rival Real Madrid at the Santiago Bernabeu. They have hammered their oppositions to grab some vital points in this crucial stage of the league. The Catalans have won 5 La Liga games on the trot and scored no less than 20 goals during this period. They are completely in sparkling form which is more than enough to beat any side at any ground and they have proven that on many occasions.

All 3 members of the MSN, Lionel Messi, Luis Suarez and Neymar found the net against the Yellow Submarines of Villarreal when the two Spanish giants faced each other in a crucial Liga BBVA match at the Camp Nou on the Saturday. The Blaugranas beat their counter part with a 4-1 margin to settle their place at the top of the league ladder. Their nearest opponent Real Madrid also earned a convincing 4-0 victory against Granada but the Los Blancos have a game in hand and any point from that extra match might be enough for them to win the top tier competition of Spanish football. 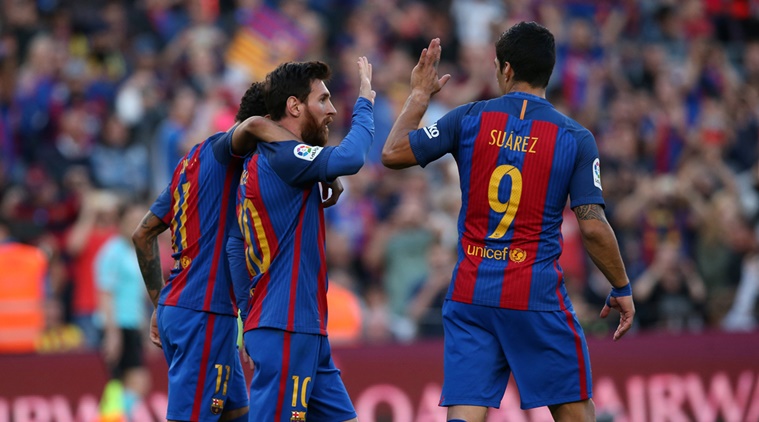 Coming back from a suspension after mocking the officials against Malaga, Neymar da Silva hit the target on 21st minute to open the scoring and gave his team an early lead. It was the 16th strike of the season for the Brazilian super star. But Congo DR international Cedric Bakambu levelled the line for the visitors 11 minutes later. But the big moment came just before the half time as the Argentine sensation Lionel Messi scored the most vital goal of the game on the 45th minute. The hosts went to the break with a 2-1 lead.

Luis Suarez the another member of the famous MSN scored on the 69th minute to give his team a comfortable 3-1 lead and completed the task for the group MSN as all members of the renowned group got their personal goals in the match. But the most special footballer of the football world, the one and only Lionel Messi completed his brace with a successful penalty kick that ensured the 4-1 victory for the Catalans. Barcelona have got 84 points beside their names after the 36 La Liga games and Real Madrid have also got the same amount of points but they have played 35 games.