Serie-A giants Napoli remains the only club of the top 5 European competition to keep their 100% winning record in the league this season. After the first 7 rounds of all the 5 highest tier domestic competitions of the European continent, Spanish giant FC Barcelona and Italian club Napoli were the only two team who kept their 100% winning record in their respective league. Then after a break of the international duty, both the teams got onto the pitch for the very first time on the Saturday night.

Both of these two teams won their all 7 previous league games of this ongoing campaign. Their records were in the line of danger as both the sides were set to face two tough opponents and that too even away from their own homes. The Catalans were scheduled to have a trip to the Estadio Metropolitano to face another La Liga giant from the capital of the Spain, Atletico de Madrid. On the contrary, the Partenopei Gli Azzurris were off to play Italian giant AS Roma at the Stadio Olimpico. 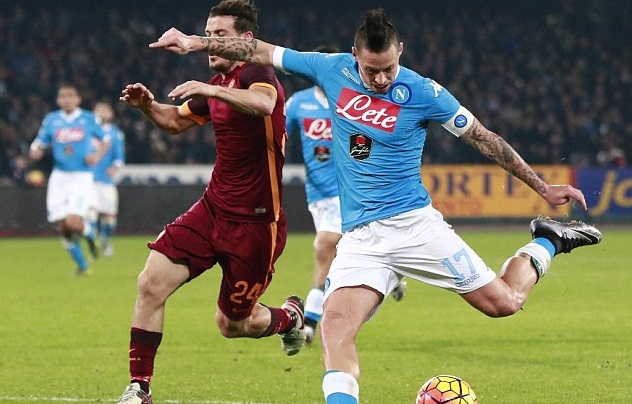 Los Rojiblancos are always a very much tough position at their home ground and it was never going to be easy for Blaugranas to go back to the home with all 3 points. Barca drew the game thanks to a late equalizer of Luis Suarez and earned just one point from the tough fixture and still stayed top of the Liga BBVA table but lost their record.

But the Blues from the Naples were just too good to be stopped and they went past Roma. Napoli had not have any single victory over the Giallorossis. Since the start of the 2015, the two teams had taken on each other on 4 occasions. Roma had have the last laugh for the 3 times and the other game ended as a goal less draw. Records didn’t talk for the Ciucciarellis but the visitors were in no shortage of confidence ahead of the Saturday night’s clash as they were in good run of form. Maurizio Sarri was keen to get all 3 points and named a strong playing line up. Forward Lorenzo Insigne didn’t take a long time to break the dead lock as he scored the winner on the 20th minute. Insigne’s lone strike was enough to hand the touring party all 3 points as the hosts failed to equalize in the next 70 minutes. Napoli is currently leading the Serie-A race with 24 points and are 5 points clear from the second placed Inter Milan.