Napoli were absolutely at their very best when they faced Bologna in their Serie-A meeting. The Ciucciarellis drew against Palermo in their very last league game before the Bologna clash and were looking for a victory and they have just displayed an unbelievable performance. The visitors showed no mercy at all to their opposition as they have scored no less than 7 goals.

The two teams from the top tier league of Italian football squared off at the Stadio Renato Dall Ara on the Saturday night. Considering the position in the league table and the form an easy victory was expected for the touring side but the visitors crossed even the expectation limits as they completely destroyed their counter parts. 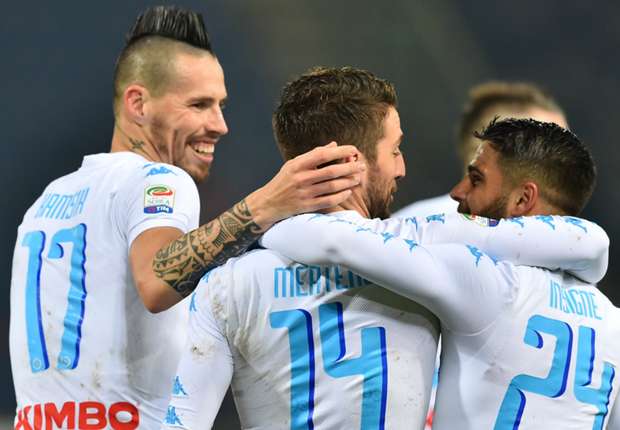 The home fans might not be happy with the result and the score card but there was no shortage of entertainment for the spectators as it was raining goals at the Renato Dall Ara. The match produced no less than 8 goals and it was interesting to watch as a football fan. Marek Hamsik and Dries Mertens both grabbed hat-tricks.

Hamsik opened the scoring with less than 4 minutes having passed in the ref’s clock. Spaniard play maker Jose Callejon provided the assist. Italian winger Lorenzo Insigne doubled the lead just 2 minutes later. It was the 8th strike of the season for the 25 years old footballer. Last season he netted on 13 occasions.

Spaniard footballer Callejon who has just turned 30, has seen his first ever red card in a Napoli shirt as he saw two yellow cards in quick succession was forced to leave the field just on the 26th minute with more than 60 minutes left on the clock and the visitors were down to 10 men. Morocco’s defender Adam Masina also saw his second red card ever for Bologna and also the first of the season on the 32nd minute and both the team were down to 10 men for the rest of the time. Dries Mertens increased the lead further just a minute later to make the line 3-1. Victor Torosidis put one back to the opposition’s net 3 minutes later to make it 3-1. With less than 3 minutes remaining in the opening period Mertens got his second and the first half finished with the 4-1 advantage for the Partenopei Gli Azzurris.

Slovakian sensation Hamsik scored another two goals within 4 minutes respectively on the 70th and on the 74th to complete his hat-trick. Mertens also grabbed his personal hat-trick with just moments left on the clock and the game finished with 7-1 victory for Maurizio Sarri’s side.