Chelsea and Tottenham the two English Premier League giants once again came head to head but this time in a crucial FA Cup semi final clash where the table toppers from the top level league of England, see off their nearest opponent and took a sweet revenge of the 0-2 defeat at the White Hart Lane earlier this year. Spurs had the last laugh on that occasion but in a high voltage game they just couldn’t match Conte’s in form and outrageous side who proved to be too strong for the Lilywhites. 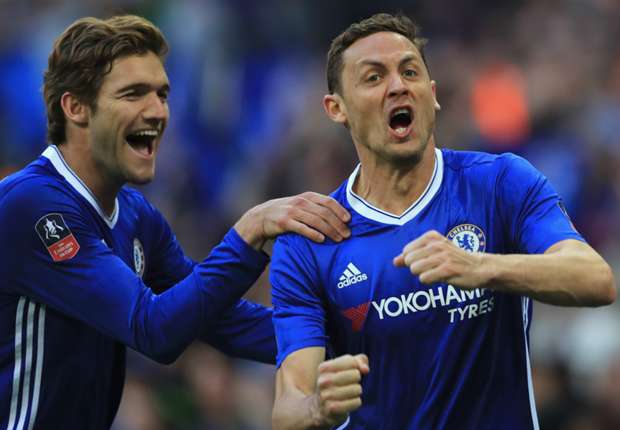 The two city rivals took on each other at the heart of the London as well as English football, the Wembley Stadium on the Saturday afternoon and competed for reaching the dream final of the historical FA Cup. The Blues’ Italian coach Antonio Conte made some surprising changes as he decided to not start with his talisman Eden Hazard and consistent scorer Diego Costa. Maurico Pochettino was conscious about Chelsea’s strength and ability and thus decided to go with a power packed starting line up. Despite having a better possession and after all those hard works throughout the campaign it just couldn’t be their year as they have been knocked out by a team who proved themselves better on the pitch on this occasion.

Willian got a surprising start as the Brazilian winger replaced the Belgian sensation Eden Hazard who was used as a second half substitute. Willian gave his team an early first half lead with a brilliant free kick as the spot kick specialist scored on the 5th minute of the match. The striker who was born to score, the Hurri-Kane named Harry Kane levelled the line with a header as he was assisted by Denmark international Christian Eriksen who himself had another chance to score. Willian scored a brace as he scored his second of the match with a well taken penalty with just 2 minutes remaining in the opening period.

Dele Alli levelled the card once again for Pochettino’s side with a close range finish, early in the second half. But Hazard’s finishing from just inside the box and a Nemanja Matic stunner finished the game in Chelsea’s favour. Coming into the pitch, Hazard changed the game as the Belgium stand by captain scored one and assisted Matic’s goal. The All Blues will now face the winner of the second semi final match as the Gunners will take on the Citizens on the Sunday in the second and last semi final of the tournament.