Which stadium is the toughest place to visit for your club? You may say Santiago Bernabeu, Allianz Arena, Camp Nou or Old Trafford. But if you are a Barca fan, you would definitely say Estadio De Anoeta. Are you wondered? You shouldn’t be wondered as the record speaks itself. Real Sociedad is actually known as a mid table club of the La Liga. FC Barcelona is the most successful club in the past 20 year’s history of the top tier of the Spanish football. But the Catalans struggled a lot against the Txuriurdins in the last 9 years. Everytime they visited the Anoeta in the last few years, had to come back home with serious disappointments.

Barcelona had not won in their last 8 trips to the Sociedad’s home ground. The last time they had won there, was back in May, 2007 thanks to the current Barca Captain Andres Iniesta and Cameroon Legend Samuel Eto’o for their goals to secure the latest league victory at the Anoeta so far for the Catalans. Since then Barca had visited there in 8 occasions, 7 times for the league duty and once for a Copa Del Rey clash but couldn’t manage to win a single time. They got defeated 5 times and were held thrice. 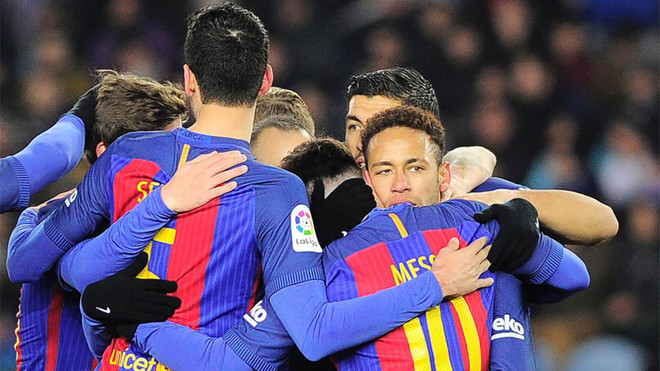 With the recent records keeping in the mind, Luis Enrique’s men were keen to break the long term curse. They have been successful on this occasion. The two team squared off in the Copa Del Rey quarter final’s first leg on the Thursday night. Barca fielded a strong line up, taking no risks. Referee Jose Gonzalez blown the whistle for a Barca penalty and Brazilian super star Neymar made the best use of the chance as he converted the spot kick into the first goal of the game. That was the decider of the game as no more goals were scored then.

Though Barca still haven’t won a league game in a long time at the Anoeta but their fans will be much more happy now with the curse broken. They will be relieved now and will go to the second leg at home with this advantage from the first leg. The two La Liga rivals will now meet in the second leg on January 25 at the Camp Nou before they once again come head to head in a league clash at the Catalan’s home ground which will take place on April 16. On the other match of the night Atletico has beaten Eibar 3-0 at the Calderon.