Neymar is considered one of the best three striker of Spanish La Liga champion Barcelona which is known as MSN. He is a Brazilian professional footballer who is the current skipper in Brazilian national football team.

Neymar would be getting out of agreement just after June, 2018 where already Barca have decided to make an extension deal with him. As a result, a recent update has released that the deal has extended for next five years which will valid till 30th June, 2021 and the extension fee for the first year will be €200 million, for the second year will be €222 million and rest three years will be €250 million which are fixed. This new extension has already ended all possibilities about leaving Camp Nou of this Brazilian skipper’s. 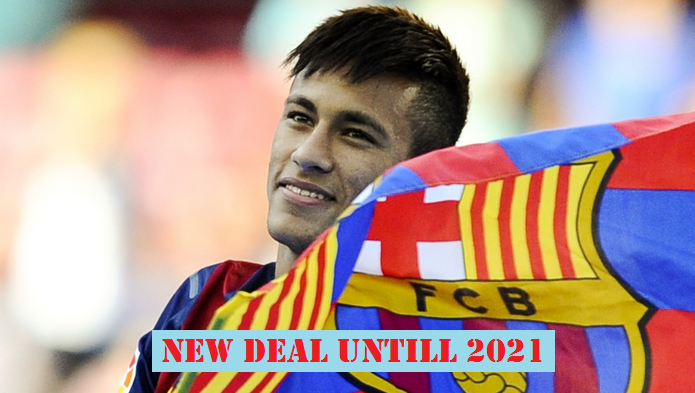 He debuted club in 2009 with Santos where he played 103 appearances and scored 54 goals so far. On 25th may, 2013, Neymar announced that he was going to sign with FC Barcelona where he received two proposal, claimed by Santos. He decided to join Barca instead of other. The transfer fee was €57.1 million for his next five years where the release clause was €190 million.

In Barcelona, he showed his quality and become one of the most inseparable player. Now, few days back a rumour spread out that he was about to leave Barca where his father claimed that will not gonna happen. He also added that his son is happy with Barca and not planning to leave them too early. Based on the rumour, some announcement spread that many famous clubs were about to tie this striker.

But, beyond all rumours a new declaration is made officially that a new extension deal has made by Barca with Neymar which will last for next five years. And so, this 24 years old Brazilian captain stated that he is very happy to stay with Camp Nou.

In his last three season in Camp Nou, Neymar Jr totally played 93 matches in La Liga where he scored 55 goals. With him, Barcelona won two La Liga and two Copa del Rey trophies. Neymar is playing for his country Brazil since 2010 and till now he has played 70 matches so far and scored 46 goals which is the 5th highest goals for his national team. Neymar who is currently standing fourth position in world’s famous athletes. He is going to participate in upcoming 31st edition of Summer Olympic 2016 which will be hosted in Brazil. He will play their to represent Brazil as one of the three over aged player.