Australia striker Nikita Rukavytsya  has been called back in national team. According to reports the head coach Ange Postecoglou has included the name of striker in the 30 man squad for 2018 World Cup playoff which will be held against Syria in the next month.

The 30 years old becomes Ukraine folk by birth. He had played last for the national in the year 2014. For the national side he could not do so much. By appearance in 13 matches he scored only one goal. So soon he kicked out from the team. But in club career he became very popular. 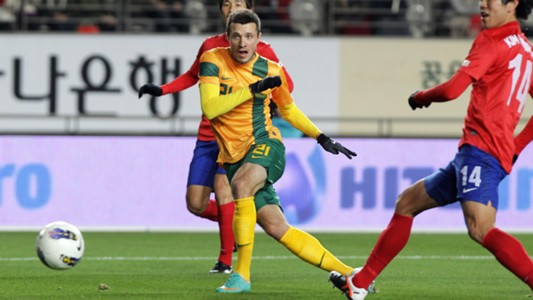 The front man presently linked with Israeli club Maccabi Haifa, where he consist a great images. His performance and strategy of play being fantastic. To see the outstanding performance Australia head coach made call to return back in the national team. If he proved himself against Syria in the first play-off he would have get chance in the national team permanently.

Australia who have unable to qualify themselves automatically for FIFA World Cup in the next year. Now they have to complete a play-off round ahead of the final competition. The first play-off against Syria going to be held on 5th October at Malacca stadium in Malaysian.

The team who win the play-off match will fight against the fourth-place holder of North and Central America region. To make place in the Russian championship teams are struggling so much and nobody could stop them.

Postecoglou has disclosed the 30 man squad for the upcoming Play-off. The team will be led by certain skipper Mile Jedinak. Because of groin injury he was far away from the field for a long time. The injury kept him out from Japan and Thailand crucial match. He also had not taken part in the Confederations Cup. But this time he will be seen to play in Malaysia.

Not only Jedinak also Mark Birighitti, Aziz Behich, Craig Goodwin and James Jeggo has been included in the squad