Portuguese super star Cristiano Ronaldo faces a ban after seeing a red card in the Spanish Super Cup against rival FC Barcelona. He wasn’t available in the season opener against Deportivo La Coruna but the team from the Spanish capital keeps flying high even without their talisman. Zinedine Zidane’s boys got a good start, in fact a great start to the season as they destroyed La Coruna at the Abanca Riazor. The fans must be delighted with the performance of the lads in the very first Liga BBVA game of the season. 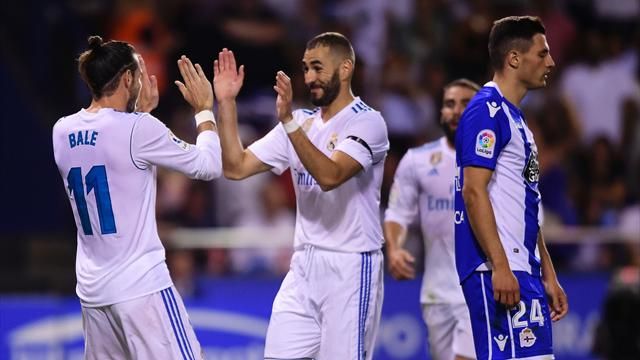 After clinching the Spanish Super Cup and the UEFA Super Cup against FC Barcelona and Manchester United, the Galacticos were in absolute red hot form before the start of the fresh new league season. But the team management was concerned with the unexpected absentee of the key player Cristiano who has been handed 5 match suspension. He missed the second leg against the Catalans and was also unavailable against the Turcos. It was a huge blow for the fans and the team but his team mate haven’t let the manager feel the absence of the key man.

Sergio Ramos, Nacho Fernandez started at the heart of the defence and Dani Carvajal along with Marcelo covered the full back positions. Costa Rican shot stopper Keylor Navas stood between the sticks. Brazilian holding midfielder Carlos Casemiro started along with Croat magician Luka Modric and Germany international Toni Kroos. Spanish winger Isco was named in the vacant place of the CR7 supporting Welsh man Gareth Bale. French striker Karim Benzema too got his place at the heart of the attack.

Club record signing Gareth Bale opened the scoring on the 20th minutes, thanks to Benzema’s assist. The goal from the Wales winger, gave the visitors the early lead. The second goal came 7 minutes later. Both the scorer and the assist provider of this goal, were Brazilians. Casemiro put the ball into the mate, which was provided by left back Marcelo. Toni Kroos sealed the deal for Los Blancos on the 62nd minute. Sergio Ramos who saw his first yellow on the 53rd minute, was shown his second of the night during the ending period. So the Spanish captain was sent off by referee Jose Gonzalez. The 31 year old will miss the very next game against Valencia which will be played at Santiago Bernabeu. The La Liga title holders are currently at the top position in the league as they have won with the biggest margin.