The Spanish winger Nolito has signed contract Manchester City with Pep Guardiola by rejecting Barcelona Summer transfer offer. On the first July he he penned a four years agreement for £13.8 million from Celta Vigo.

The 29 former Barca attacker joined Celta Vigo in 2013 by signing a four years contract and this season he was offered of two leading club Barcelona and Man City. And the forward accept  Guardiola offer and joined their side from 1st July.

Nolito disclosed the truth and said he was enjoyed playing in Barcelona but he had not get more time to continue it. He also told the reporters he has not wanted to be part of the Barca Bench for a long time. Even he wanted the rights to play as regular player and that’s why he chose Man City. 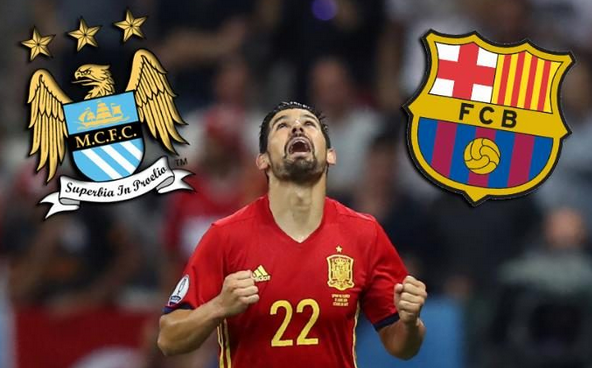 He wished all the best to FC Barcelona and said he was very happy and felt pride for Barcelona’s interest. He also told that with La Liga side, he got the chance to play with Messi, Suarez and Neymar which was big deal for any footballer but he wanted the starting eleven which has not chance in Spanish Side.

He also praised about the new signing club and told it became a great club and also the one of the best team in Europe. They consisted some world class footballer in their side and they gave the players many facilities in Europe. He also expressed that he became very happy to join the side so far.

As he had been spent a couple of days with the side he felt the existence of the club. The Spanish man mentioned that the team consisted many talented players like David Silva, Sergio Aguero and it became totally different team in the world.

By speaking about straight choice between Manchester City and Barca he exclaimed he mentioned that it had been the best decision for him and also his career. He wanted to play at Premier League and the side help him to come true his dream to work under Pep Guardiola.

Nolito spent a wonderful year season where he made 34 appearances for his former club Celta and able to score 0f 13 goals as the winger. He is outstanding winger at all and promise do everything what he could for club good deed.

The 29 years forward confident on his decision and desperate to debut in Manchester City club. He think he is well talented attacker and he has the ability to do rock wherever he performed.