“Leo Messi you genius!” shouts the commentator with the microphone in hand when the Argentine sensation scored his first goal with an incredible solo effort inside the box. The magician displayed a scintillating show of the brilliant football at the Santiago Bernabeu on the Sunday night. The world stopped for 90 minutes as it was the time for most awaited and incredible football event of the world and the little magician did what he does the best and completely stole the show on the rivals’ home ground to keep the La Liga title race alive with a superb brace.

The two Spanish giants took on each other on the Sunday night in a very crucial Liga BBVA clash at the Santiago Bernabeu, Madrid. The game had a significant importance to decide the La Liga title of the season and the visitors did what could they do the most for their side and sent themselves at the top of the league table although Los Blancos still have a game in hand but doesn’t matter what comes as the final result, winning an El Clasico is always a huge achievement and the Catalans did the same. 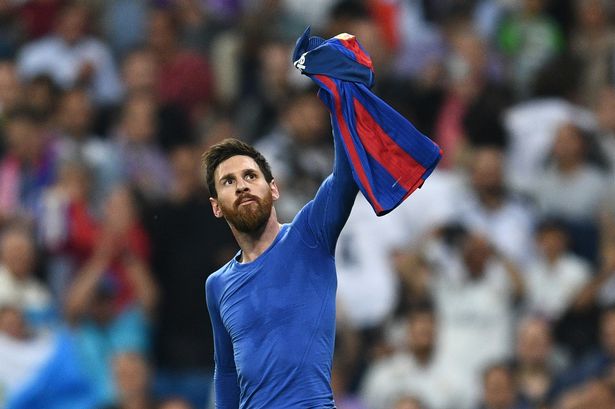 “Beaten, bloody, but still one of the best” the another superb piece of a speech by the official commentator of the game. This commentary just proves how much impressive the Argentine captain was on the pitch despite being elbowed by Galacticos left back Marcelo which caused bleeding from the king Leo’s mouth early in the first half but nothing could prove him from cancelling out Casemiro’s opener with a sublime goal which ended the first half 1-1.

Ivan Rakitic’s angling calculated screamer sent Barca up front with less than 20 minutes remaining on the referee’s clock but coming into the pitch Colombian super star James Rodriguez levelled the line straightway for the home side which was thought to be the final goal of the game. But wait you just can’t even think that the game is over until the final whistle is blown as long as there is someone like Messi and a great run from Barca right back Sergi Roberto and a superb placement from the 5 time Ballon d’Or winner saw his team winning the game on the very last minute which was also his 500th Barcelona goal. Messi reached the landmark with sensational style and the man with the microphone screamed for the last time “Watch out who’s running, one of the best in the history.”