West Indies national cricket team is currently visiting United Arab Emirates where they are scheduled for a tournament with Pakistan. The tournament has already started in 20th September and it will end up in next November, 2016. The tournament is consists of T20, ODI and also Test series. The two participants have already played T20 and ODI series and in both two format, Windies was whitewashed by the Green Shirts. They have played three T20 internationals and three One Day Internationals. Though, before the tournament start, they have attended some warm up competitions. Also before the ODI has started, Windies national team was ahead of Pakistan but after losing all three ODIs, the position is currently retaken by the Shaheens. Now, there is a Test series ahead and the both teams are now preparing for it. Windies does not want to fail here too but currently the Shaheens are standing in top position according to ICC after drawing the series against England by 2 – 2. Though, India has achieved much points than Pakistan by winning the Test series against New Zealand which makes them the number 1 in Test unofficially. Though, ICC yet to make any official announcement. So, there is no other way for the Green Shirts but to win the series by simply whitewash West Indies to keep the top position from India. 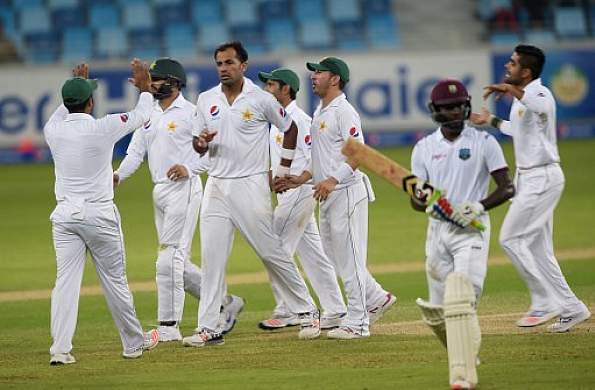 However, Pakistan last played a complete Test series against Windies in last 2011 where the series was drawn by 1 – 1 when the Green Shirts visited West Indies. But, last time Windies team travelled Pakistan in 2006/07 and then the Shaheen defeated Windies by 2 – 0. But now, Pakistan is not authorized to arrange any tournament into their ground due to political contradiction and terrorist attack. But, UAE used to help them to arrange a tournament into UAE ground instead. And obviously, the Shaheens usually played there as their home venue. So, it would be tough for Windies team to beat them there.

Besides, team Pakistan is totally motivated to defeat West Indies due to secure their Test title which was grabbed a couple of months ago by them and they have achieved it for the first time after 2003.

Though, since the beginning of the season, the Test title was changed a number of times. First South Africa, then India grabbed it and later Pakistan gained from team Australia in last August. But now, India is so close to it and if ICC will update their ranking, the Men in Blue will undoubtedly achieve. But the Shaheens will not let it go so easily and they will try to defend their honour by destroying Windies but however, ultimately they might not able to keep it because India still has nine Test matches ahead.